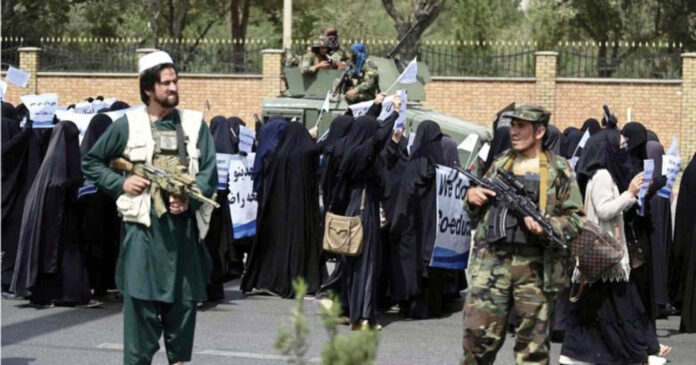 NEW DELHI
Afghan women should not be allowed to work alongside men, a senior figure in the ruling Taliban said, a position which, if formally implemented, would effectively bar them from employment in government offices, banks, media companies and beyond.
Waheedullah Hashimi, a senior figure in the Taliban who is close to the leadership, told Reuters the group would fully implement its version of shariah, or Islamic law, despite pressure from the international community to allow women the right to work where they want.
Since the movement swept to power last month, Taliban officials have said women would be able to work and study within the limits laid down by sharia.
But there has been widespread uncertainty about what practical effect that will have on their ability to keep their jobs. When the Taliban last ruled Afghanistan from 1996-2001, women were barred from employment and education.
The issue is of major importance to the international community and could impact the amount of aid and other assistance that is given to Afghanistan, which is in the throes of economic crisis.
“We have fought for almost 40 years to bring (the) sharia law system to Afghanistan,” Hashimi said in an interview. “Sharia … does not allow men and women to get together or sit together under one roof.
“Men and women cannot work together. That is clear. They are not allowed to come to our offices and work in our ministries.”
It was unclear to what extent Hashimi’s comments reflected the new government’s policies, although they appeared to go further than public comments made by some other officials.
In the days following the Taliban’s conquest of Kabul, Taliban spokesman Zabihullah Mujahid told reporters that women were an important part of the community and they would work “in different sectors.”
He also specifically included women employees in a call for government bureaucrats to return to their jobs.
ALL-MEN CABINET
However, the cabinet appointments announced on Sept. 7 did not include any women and there have been widespread reports of women being sent back home from their workplaces.
Hashimi said the ban on women would also apply to sectors like media and banking, where women have become increasingly prominent since the Taliban fell in 2001 and a Western-backed government was installed.
Contact between men and women outside the home will be allowed in certain circumstances, for example when seeing a male doctor, he added.
Women should also be allowed to study and work in the education and medical sectors, where separate facilities can be set up for their exclusive use.
“We will of course need women, for example in medicine, in education. We will have separate institutions for them, separate hospitals, separate universities maybe, separate schools, separate madrassas.”
On Sunday, the Taliban’s new education minister said women could study at university, but must be segregated from men.
Women have staged several protests across Afghanistan, demanding that the rights they won over the last two decades be preserved. Some rallies have been broken up by Taliban gunmen firing shots into the air.
Improved women’s rights — more noticeable in urban centers than deeply conservative rural areas — were repeatedly cited by the United States as one of the biggest successes of its 20-year operation in the country that officially ended on Aug. 31.
The female labor participation rate stood at 23 percent in 2020, according to the World Bank, up from effectively zero when the Taliban last ruled.