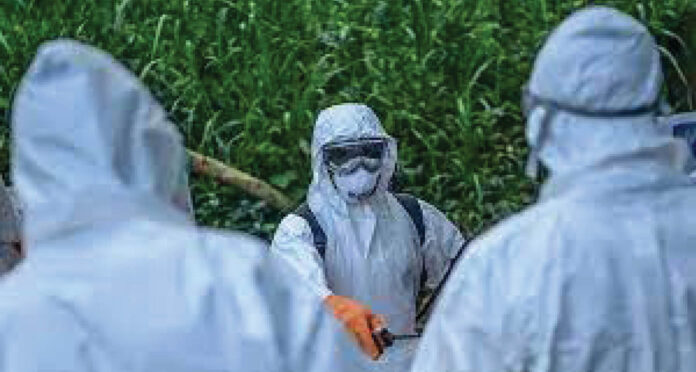 Over 14,000 cases have been reported in first 7 months of 2021, according to official figures
NEW DELHI:
With India still reeling under the second wave of COVID-19, the rising cases of dengue fever has triggered a new health challenge in the populous South Asian country.
During a meeting held last week, India’s Health Secretary Rajesh Bhushan highlighted the “emerging challenge of serotype-II (strain) dengue” in 11 states, following COVID-19.
This year India witnessed an unprecedented rise in COVID-19 cases, with daily numbers and figures even crossing 400,000.
Now, the dengue fever is adding another challenge to the country’s health system, with the northern Uttar Pradesh state becoming the worst affected state.
The outbreak in the state has already killed dozens of people in the state, promoting authorities to take additional steps.
Dengue, a viral disease, is transmitted by the infective bite of the Aedes Aegypti mosquito. It occurs in two forms: Dengue Fever and Dengue Hemorrhagic Fever (DHF).
“Our district has recorded the maximum number of cases in the state,” Dinesh Kumar Premi, the chief medical officer in the Firozabad district, told Anadolu Agency over phone.
Premi said 62 people have died due to high fever and there are five confirmed deaths from dengue.
He said that several steps are being taken to destroy mosquito breeding grounds.
According to India’s National Vector Borne Disease Control Program, 39,419 cases of dengue were reported in 2020 with 56 fatalities.
Over 14,000 cases have been reported in the country until July this year, according to official statistics.
Less attention
Dr. P.V. M. Lakshmi, professor of epidemiology at school of public health in northern India’s Post Graduate Institute of Medical Education and Research, told Anadolu Agency that the pandemic overshadowed the vector borne diseases.
“Because of too much attention to COVID-19, many forgot about vector borne diseases. Before the pandemic, people with fever used to get tested for dengue,” said Lakshmi.
She said that no one is paying much attention to other common illnesses which were there before the pandemic.
“This was the main reason for labelling dengue as mystery fever which it is not. Dengue was there before COVID-19 and will stay as long as the Aedes mosquito is there,” she said.
Many regions, especially the northern Uttar Pradesh state, have seen cases of high fever and is being referred to as “mystery fever.” As the disease is not diagnosed, experts suspect that the deadly fever is triggered by dengue or could be due to scrub typhus.
On the outbreak of the dengue, Lakshmi noted that it is usually seen in a cyclical trend after every two to three years.
“We should not neglect tropical diseases and should pay equal attention to all tropical fevers as we used to do before the pandemic,” she said, adding that the standard vector control measures should be put in place.
Dr. Lalit Kant, former head of Epidemiology and Communicable Diseases Division at the Indian Council of Medical Research (ICMR), told Anadolu Agency that the dengue outbreak will add burden to the health system.
“It is something that will increase the burden on the health system because ways to control these two (COVID-19 and dengue) are different,” he said.
“All our efforts till now were on looking into COVID-19. Changing the system to deal with a different situation might take some time,” Kant said, referring to the dengue outbreak.
He said that panic among the people can be minimized with early diagnosis.
“The government should assure the people that we will be able to take care of it … If it is diagnosed early and at an appropriate time, there will be no panic,” he said, referring to the panic triggered by “mystery fever” suspected to be the dengue fever.
Not only dengue, deadly Nipah virus cases have also been reported in southern Kerala state, which is struggling to contain the COVID-19 cases.
Health Secretary Bhushan, in a meeting held on Saturday, asked states to take several steps – including early detection of cases, adequate stocking of testing kits, fever survey, contact tracing and vector control – to prevent the spread of diseases.