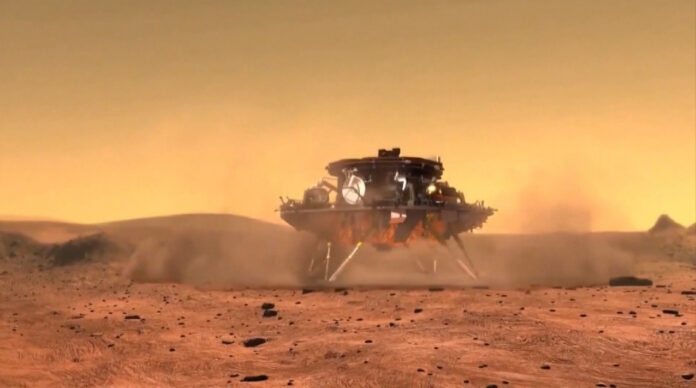 During the 100 days, the Mars rover traveled 1,064 meters southward from its landing point with six scientific payloads and obtained about 10GB of raw data.

The Mars rover, which is in good condition and has adequate power supply, will continue to move southward to the boundary zone between the ancient sea and the ancient land in the southern part of Utopia Planitia, a vast plain in the northern hemisphere of Mars, to acquire more data.

As part of China’s first Mars mission Tianwen-1, the lander carrying the rover touched down on Mars on May 15. About one week later, the Zhurong Mars rover drove down from its landing platform to the Martian surface for exploration.

Zhurong has completed its planned 90-Martian-day-mission (about 92 earth days) on Mars and is now conducting extra exploration and detection tasks, said Zhang Rongqiao, chief designer of the Tianwen-1 Mars exploration mission, adding that the focus of engineers’ work related to the Mars mission has been shifted from controlling its flight to ensuring its long-term operation.

New technologies have been applied to the Zhurong Mars rover for thermal control, according to Sun Zezhou, chief designer of the Tianwen-1 Mars probe. “We have converted solar energy into thermal energy with a solar collector so that the rover can maintain an ideal temperature level on the Martian surface, especially at night,” Sun said.

“Judging from the rover’s operation so far, its thermal control performance meets our expectations,” he added.

As of August 30, the orbiter of the Tianwen-1 Mars mission had been in orbit for 403 days at a distance of about 392 million kilometers from the Earth.

Both the orbiter and rover are on steady power supply. Their devices are functioning effectively and systems in smooth operation.

In order to be better prepared for possible new modes and states of the orbiter and rover in the following stage of their exploration, researchers have double checked and improved emergency response plans for them and carried out necessary ground verification and simulation exercises, in a bid to guarantee their stable and sound operation.

The six scientific payloads onboard the Zhurong Mars rover, including a navigation terrain camera, a multispectral camera, a surface composition detector, a surface magnetic field detector, a subsurface radar as well as a meteorological measurement instrument, have all been on during the rover’s detection and exploration tasks on the Martian surface, pointed out Liu Jianjun, chief designer of the ground application system of the China’s first Mars exploration mission.

The navigation terrain camera can obtain topographic data along the way to help Zhurong plan its routes and choose its targets for inspection. The data collected is also helpful for researching into the topographic features and geological structures of the Martian surface.

The subsurface radar acquires data on the layered structure below the Martian surface, which can be used to analyze the shallow surface structure and explore possible underground water and ice.

The meteorological measurement instrument on the rover collects meteorological data on such factors as temperature, pressure, and wind speed for research into the atmospheric physical characteristics of Mars.

The surface composition detector and the multispectral camera collect spectral data from typical targets including rocks and soil for analysis of and research on the elements and minerals of the Martian surface.

Heading to the boundary zone between the ancient sea and the ancient land in the southern part of Utopia Planitia, where the elevation gradually rises, the Mars rover will detect rocks, sand dunes, impact craters, grooves, suspected mud volcanoes, and other objects along the way, Liu noted.

It is expected to collect a huge amount of data on Mars and help scientists study and gain better understanding of the planet, he said.

As the solar electromagnetic radiation will disrupt the communications between the orbiter and rover and the Earth during an anticipated sun outage from middle September to late October, which refers to a phenomenon when Mars and the Earth move to both sides of the Sun and the three are almost in a straight line, the orbiter and rover will switch to a safe mode and suspend operations during the period, according to Sun.
After the sun outage is over, the orbiter will enter an orbit for global remote sensing on Mars at a proper time to collect data on the planet’s topographical features and geological structures, surface material composition and soil type distribution, ionosphere as well as space environment. Meanwhile, it will continuously help with the communications between the rover and the Earth during the latter’s following detection work.
The rover will resume highly efficient exploration and even perform more demanding tasks after the sun outage ends.

“We have been prudent in ensuring the planned 90-Martian-day-mission of the rover on Mars. During the following tasks, we may carry out more challenging tests to accumulate experience and reserves of technology for future exploration missions on other extraterrestrial bodies,” Sun pointed out.