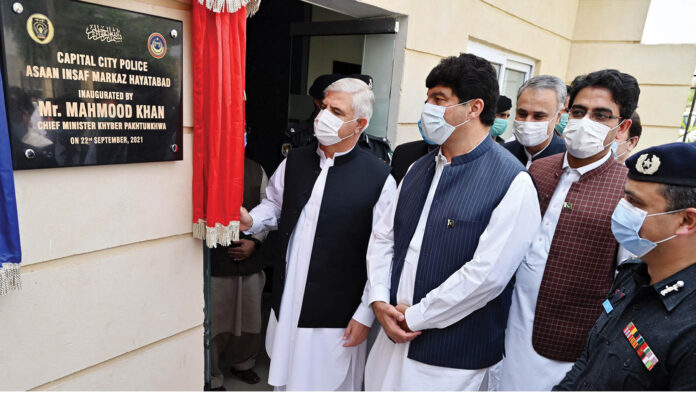 PESHAWAR
Chief Minister Khyber Pakhtunkhwa Mahmood Khan on Wednesday paid a visit to Hayatabad Police Station Peshawar where he formally inaugurated newly established ‘Asaan Insaaf Markaz’.
“Under the first phase of “Asaan Insaaf Marakiz”, project four other police stations of the Provincial Metropolitan including University Town, Faqir Abad, Badhaber and Chamkani would also be converted into Asaan Insaaf Marakiz, whereas in the second phase of the project the remaining twelve police stations of Peshawar would be transformed into Asaan Insaaf Marakiz.
Later on, the project would be extended to other districts of the province including newly merged areas. Transforming police stations into Asaan Insaaf Marakiz is aimed at bringing about visible change in traditional thana culture, providing improved services to visitors in police stations, ensuring easy access of citizens to police and promoting people friendly policing in the province. Asaan Insaaf Marakiz would have state of the art Reporting Room, Visitor’s Management Systems, Queue Management System, Complaint Management System and Record Management System.
Similarly, modern software would be introduced for effective policing, maintaining record and other services in those marakiz. Separate desks would be established for female, transgender, children and old citizens and all the activities of police stations would be monitored directly through CCTV cameras.
The chief minister on the occasion inspected the different departments of newly established Asaan Insaaf Marakaz. Provincial Minister Taimur Salim Jhagra, Special Assistant Kamran Bangash, Deputy Speaker Provincial Assembly Mahmood Jan, Chief Secretary Dr. Kazim Niaz, Inspector General Police Muazam Jah Ansari and other relevant officials were also present on this occasion.
The chief minister lauded the initiatives taken by the police department to bring about change in police stations adding that provincial government was working to strengthen the police department in line with the needs of modern era.
Later, the chief minister also visited Islamia Collage Peshawar where he inaugurated newly developed hockey turf completed at the cost of Rs. 90 million.
Talking to media representatives on the occasion, the chief minister said that provincial government was taking visible steps to promote national game-hockey and other sports activities in the province adding that there were only two hockey turfs in the province before the government of PTI whereas provincial government of PTI had completed four new Astroturf of international standard in the province. He said that work on other six Astroturfs were in progress out of which some were due for completion and added that three more Astroturfs would be developed in Buner, Swabi and Malakand.
The chief minister said that before the PTI government only 69 sports grounds were available in the province whereas PTI government constructed an additional 110 grounds during its tenure.
He added that our national sport-hockey was on downfall due to negligence of previous governments but now the incumbent provincial government was taking concrete steps for its revival in line with vision of Prime Minister Imran Khan; and for the first time in the history of province, Hockey League was being held on the pattern of Cricket League which would help to promote hockey.
Responding to a question, the chief minister said that there is complete peace in Khyber Pakhtunkhwa and the environment was conducive for tourism and sports activities.
Mahmood Khan stated that during the current tourist season 2.7 million domestic and foreign tourists visited the tourists’ spots of the province; adding that the incumbent provincial government was striving to promote sports activities like tourism in the province; and the provincial sports department was working in a well organized manner to this end.
Mahmood Khan stated that the government was going all out to provide a healthy environment to youth by boosting sports activities.
A cricket stadium of international standard was being established in Kalam adding that rehabilitation of Arbab Niaz Cricket Stadium and construction of international standard cricket stadium in Hayatabad Sports Complex was in its final stages.
He further said that sports grounds were being established at tehsils and union councils’ level. Moreover, sports activities were being held at divisional and district level besides development projects in the sports sector.
Later, the chief minister held a meeting with the administration of historic Islamia College Peshawar and assured that the provincial government would go all out to resolve the issues of the college.