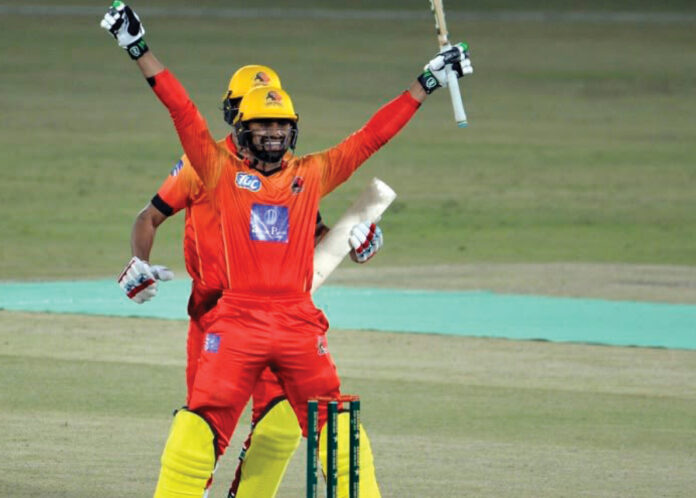 Sindh finish the group stage with 12 points, level with Central Punjab
LAHORE
Sindh outplayed Balochistan in a low-scoring fixture to finish their round matches with 12 points
in the 29th match of the National T20 tournament here at the Gadaffi Stadium on Monday evening.
Young Karachi-born batter Mohammad Taha steered Sindh to the 114-run target with a gritty unbeaten 47 off 48 balls (four fours) in what turned out to be a challenging chase on a spin-friendly pitch.
Sindh had lost their seasoned batting trio of Sharjeel Khan, Khurram Manzoor and Shan Masood by the time the scored reached 53 (nine overs).
Danish Aziz provided crucial support to Taha and the two took the side past the target with eight balls and five wickets to spare, the left-handed Danish returned undefeated on 19 off 18 balls (three fours).
Off-spinner Mohammad Ibrahim Snr took two wickets for Balochistan.
Earlier, Sindh’s captain Shan Masood won the toss and opted to field. Balochistan openers Abdullah Shafique and Abdul Wahid Bangalzai added 54 runs for the first-wicket, however the duo could only score at a run-a-ball in their nine-over stay as Sindh bowlers maintained tight control.
Wahid was the first to go, he was dismissed by leg-spinner Abrar Ahmed for 29 off 30 balls (four fours).
Abdullah followed Wahid to the dugout at the same score, the right-hander scored 22 off 26 balls (two fours).
Balochistan stuttered to 78 for four as Ibrahim Snr and Hidayatullah fell cheaply. Umaid Asif was then run out for five with the score at 96 in 18.3 overs. Skipper Sohail Akhtar who held the innings together played some big shots in the final overs to lift the side to 113 for five which despite his efforts was clearly an under par total. Sohail hit one four and two sixes in his 37 off 36 balls.
Abrar was the pick of the Sindh bowlers. In four overs, the promising spinner took two wickets for a mere 15 runs. Danish and Rumman Raees took a wicket apiece conceding 14 and 25 runs respectively in their hugely economical four-over spells. Balochistan finished their 10 matches with six points (three wins, seven defeats). They had crashed out of the semi-final race after their narrow defeat to Home City Central Punjab last night.