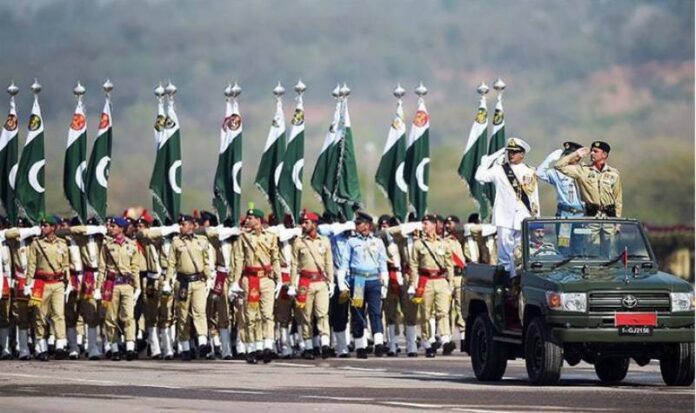 Defence Day was observed with traditional spirit and enthusiasm all over the country.

Defence and Martyrs’ Day was observed Monday to pay tributes to the martyrs and Ghazis and reaffirm commitment to defend the motherland against all threats.

The Pakistani nation paid a befitting tribute to the country’s armed forces who lay down their lives for the motherland,
The day dawned with 31 gun salute at the Federal Capital and 21 gun salute at provincial capitals.

It was on this day in 1965 that the Indian forces crossed international border in the darkness of night to attack Pakistan but the nation foiled nefarious designs of the enemy.

This year’s Defense and Martyrs’ Day theme is “Our martyrs our pride, salute to all the relatives belonging to ghazis and Shaheeds.”
Special prayers in mosques across the country were offered at Fajr for the peace and prosperity of the nation. Prayers for the liberation of the people of occupied Kashmir against the Indian forces were also offered

Fateha and Quran Khawani was held for the martyrs.
A change of guard ceremony was also held at the Quaid’s mausoleum during which cadets of PAF Asghar Khan Academy assumed ceremonial guard duties at the mausoleum.
.
The national media also aired special programs comprising national songs, interviews of the family members of the martyrs and ghazis to pay homage to the defenders of the motherland.
In his message on Defence Day, President Alvi vowed that Pakistan would never compromise its integrity.
Separately, Prime Minister Imran Khan also paid tribute to the valiant soldiers of the Pakistan Army, recognising their efforts to keep the country safe and protected against all sorts of aggression.

Etisalat crowned as the strongest telecom brand in the world