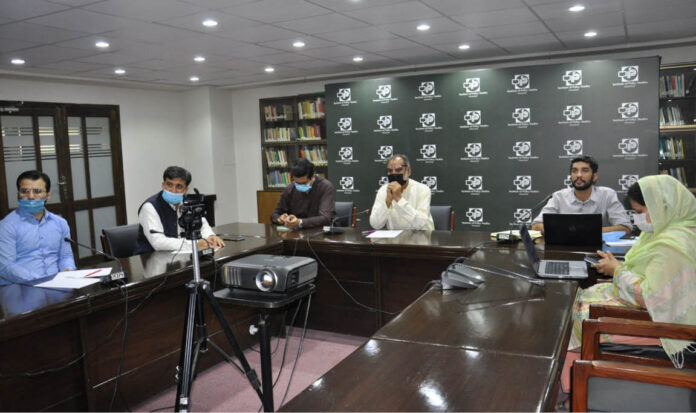 Enhancing public-private partnership, streamlining financial instruments in and paving grounds for increasing power purchase agreement (PPA)-based contracts is the only way forward for creating a conducive environment for third party intervention in solar based distributed generation in the country.
This was the gist of the consultative session titled ‘Prospects of Third-Party Intervention Framework and Business Models for Photovoltaic (PV) based Distributed Generation’, which was held at Institute of Policy Studies (IPS), Islamabad to assess and discuss business models to foster solar PV based distributed generation uptake for commercial and industrial power sector consumers.
Chaired by Former Federal Secretary Water and Power Mirza Hamid Hasan and co-chaired by Chairman IPS Khalid Rahman, the deliberation was addressed by energy experts and practitioners like Dr Irfan Yousuf, consultant renewable energy, National Electric Power Regulatory Authority (NEPRA), and Dr Bilal Masood, additional director R&D, NEPRA, whereas Muhammad Saeed from Pakistan-Germany Renewable Energy Forum (PGREF), Muhammad Ali Qureshi from SAARC Energy Centre and Hamza Naeem, researcher from IPS were also among the speakers.
The discussants were of the view that high end tariff and load-shedding are the primary drivers behind the shift of consumers towards the alternate source of cheap energy, as usage of solar PV based distributed generation facilities vis-à-vis net-metering are on the rise in the country. NEPRA has to regulate proliferation of PPA business models so that the record of each installed capacity remains in place, they emphasized.
It was also observed during the discussion that the government is not giving subsidies to the SMEs involved in implementing the PPA model despite the fact that SMEs can play an important role in solar power generation.
This, the speakers opined, can be addressed through easy loans, grants, crediting schemes under the State Bank renewable finance and introduction of feed-in tariff for deployment of such installations.
The speakers however maintained that the existing power sector is so much problem ridden that it warrants a careful study of the concept before any concrete steps are taken for its implementation.

Huge need to increase production of Made in Pakistan Products, Hina

The govt has to build special economic zones for women entrepreneurs: Riffat