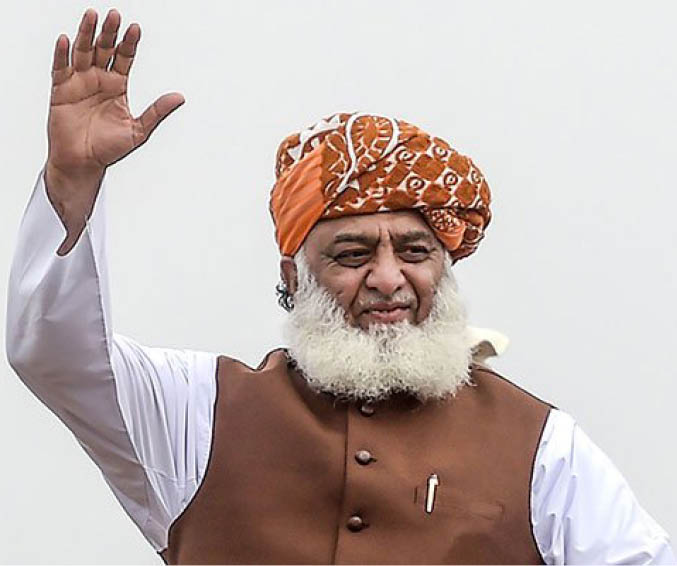 ISLAMABAD, NOV 12 (DNA) – Pakistan Democratic Movement (PDM) and Jamiat Ulema-e-Islam (JUI-F) chief Maulana Fazlur Rehman has said that the Opposition will unitedly go into the joint session of the parliament to take on the government.

He was addressing a joint news conference along with Pakistan People’s Party (PPP) Chairman Bilawal Bhutto Zardari who called on him at his residence in Islamabad on Friday afternoon.

Maulana Fazl said the whole nation was facing a tough situation. “It’s need of the hour and demand of the public to oust this fake government,” he added. Maulana Fazl said if the government went ahead will its plan to do legislation in the joint session of the parliament through its fake ‘numbers’ then it would be a dictatorial step.

He said the opposition will play its due role by upholding the parliamentary traditions and will foil government’s ‘dirty tactics’. Responding to a question, he said Bilawal Butt had come to visit him because “we have a link spanning over three generations”.

Bilawal Bhutto said the government is suffering defeat after defeat due to the unity in the opposition ranks. “We foiled the conspiracy of the NAB Ordinance and EVMs,” he said, adding he and Maulana Fazl did not discuss the PDM.

Maulana Fazl said “We want elections in the country. People must get their right to vote.” He said he is PDM president and could not decide on his own of including the PPP in its protest campaign.

Both the leaders also exchanged views over ongoing political scenario and anti-government strategy. They also deliberated upon the situation caused by the increasing inflation in the country.

Earlier, signs of a thaw have emerged between the Pakistan Democratic Movement (PDM) and Pakistan People’s Party (PPP) as both have established contact after many months.

Both the leaders discussed the ‘internal situation’ of the Parliament and also mulled a joint strategy in this regard. This was Bilawal’s first meeting with Maulana Fazl after quitting the PDM nearly six months ago.

The PPP had parted ways with the PDM in April this year alleging PDM parties had been levelling serious allegations against each other amid the show-cause notice controversy.

Bilawal had then said: “We believe in politics with mutual respect and trust. The same ideology we follow within the alliance politics. The PPP CEC demands an unconditional apology to ANP [Awami National Party] and PPP for this obnoxious conduct. The PPP stands by ANP in this regard and we will not abandon them under any circumstances.”

JUI-F leader Maulana Ghafoor Haidri had called the PPP move ‘political suicide’, ‘blessing in disguise for PDM’ and kind of support to the PTI government, while PML-N vice president Maryam Nawaz had said JUI-F and PDM chief Maulana Fazlur Rehman would have a final word on its fate after the PPP’s response.

The ANP earlier alleging that the PDM had been ‘hijacked by some of its member parties’ had already parted ways with the group after receiving a ‘show-cause notice’ from alliance’s general secretary who is also senior vice president of the PML-N Shahid Khaqan Abbasi.

Earlier, Bilawal Bhutto said that opposition is united under the leadership of Pakistan Muslim League-Nawaz (PML-N) President Shehbaz Sharif. My party will fully support opposition leader in joint session of the Parliament, he pledged. = DNA