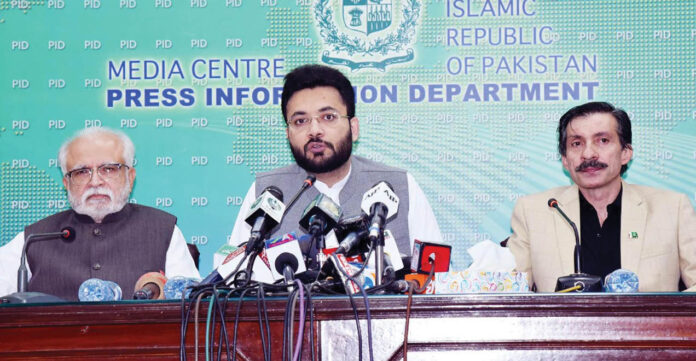 ISLAMABAD
Minister of State for Information and Broadcasting Farrukh Habib has asked the Sindh government to release wheat stocks from its warehouses to flour mills in order to bring down the prices of flour in the province.
Addressing a news conference on Friday, the minister said that Punjab and Khyber Pakhtunkhwa governments have released their stocks to the flour mills at the official rate of Rs1,950 per forty kilogram. He said the price of a 20-kg flour bag in Punjab province is Rs1,100 whilst the same is being sold in Sindh at the rate between Rs1,400-1,500.
The minister of state lamented that the PPP government in Sindh has left the people at the mercy of mafias. Habib said the government will soon launch a programme to provide subsidies to the marginalized segments of the society on wheat, sugar and ghee.
He said the Sindh government is hand in glove with the mafia fleecing the consumers by selling wheat flour at higher rates. He said the ruling elite of Sindh including Asif Zardari, Bilawal Bhutto and Murad Ali are responsible for adding fuel to the injury of people by not releasing the public stock of wheat to the flour mills.
He said profiteers and hoarders are at par with the Sindh cabinet and they are being facilitated to mint money at the cost of poor consumers, adding, the ruling elite has its share in the ill-gotten money.
He said it is the responsibility of the government to release wheat stock as such interventions help stabilise its prices. He reiterated the demand that the Sindh government should release the government stock of the wheat at the earliest to provide relief to the consumers.
He said the Ministry of National Food Security and Research, a couple of days ago, wrote a memorandum to the Sindh government with the observation that the pricing trend in Sindh indicated that due to delay in release of wheat from public stock by the food department, prices were unstable in the province. The minister said despite having the public wheat stock about 1.269 MMT, no releases have been started so far by the Sindh government.
Speaking on the occasion, Special Assistant on Maritime Affairs Moulvi Mahmood said Sindh has declared wheat stocks of 1.250 million tonnes and it should release the commodity to reduce its price. He said if the Sindh government thinks they do not have the declared stocks, it should contact the federal government which has ample stocks to release to the province.
He said the Sindh people in general and Karachi people in particular gave mandate to Pakistan Tehreek-e-Insaf and it would not leave them at the mercy of the Sindh government.

Sialkot lynching incident a day of shame for Pakistan: PM

COAS for institutional mechanism to combat humanitarian crisis in Afghanistan