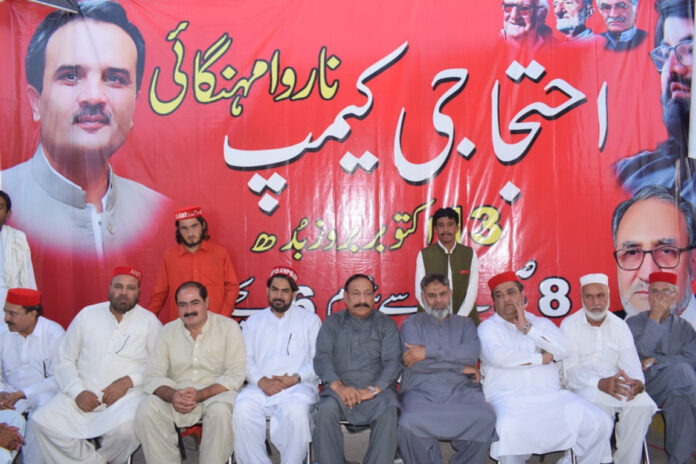 Awami National Party Ex president and former district Nazim Hamitaullah Mayar on Wednesday said that the Pakistan Tehreek-e-Isaf (PTI) government is anti-people government instead of giving 10 million jobs, about 6 million people have been made unemployed.
He expressed these views while addressing a sit-in staged by ANP Mardan chapter at Bacha Khan chowk.
The sit-in started from 8 am and continued till 6 pm. Large numbers of ANP activists attended the sit-in. ANP District President Syed Jamal Bacha, General Secretary Haroon Khan, City President Abbas Sani, Jamal Nasir, Javed Yousafzai, Bin Yamin and other office bearers also addressed the sit-in.
Haider Hoti added that in the PTI government the prices of medicines have increased from 100 to 900 percent and the prices of essential commodities have gone up by 200 to 300 percent.
He added that the incompetent government has to be got rid of. He added that due to high inflation, the poor people have been deprived of two meals a day.
He added that 20 kg bag of flour is selling on Rs 1450 instead of Rs 750, ghee price is increased from Rs150 to Rs 350 per kg, sugar price is increased from Rs 68 to Rs 110, petrol from Rs 70 to 127 per letter and prices of essential commodities have gone up by 300 per cent.
He added that the government has failed on every front. He added that it is the responsibility of the Prime Minister to provide health, education and employment to the people.
He added that the Prime Minister promised 10 million jobs but 6 million people were unemployed. He added that those who promised to give 5 million houses made people homeless.
He added that corruption is common in BRT, school furniture, books, minerals, trees plantation campaign while billions of rupees were embezzled in the tree plantation campaign and especially in Malam Jabba.
He said that 700 billion rupees is remaining with the central government of our province in connection with the NFC award which is occupied by the central government. He added that Imran Khan has totally failed to fulfill his promises.

Mardan based traders to lodge protest at Faizabad Rawalpindi