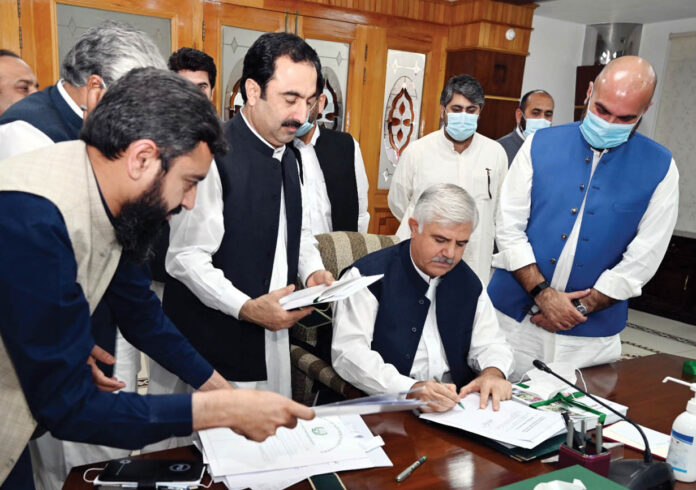 The Khyber Pakhtunkhwa (KP) annual budget for the fiscal year 2021-22 unveiled by Finance Minister Taimur Saleem Jhagra in the provincial assembly here on Friday. KP budget 2021-22 has a total outlay of Rs 1.118 trillion, the largest ever in the province’s history.
Presenting the budget, Taimur Salim Jhagra said that total expenditure of KP government is estimated at a record budget of Rs 1,118 billion, including Rs 919 billion in the settled districts, and Rs 199 billion in the merged districts.
Annual Development Program (ADP) composed of an Rs150 billion provincial component and over Rs89 billion for donor-funded projects.
According to budget 2021-22, “total expenditure is estimated at Rs 1,118 billion for the entire province of KP. This includes Rs 747 billion as Current Expenditure and Rs 371 billion as the total Development Expenditure. In Current Expenditure of Rs 747 billion, Rs 466 billion are the pensions, provincial and district salaries.”
The KP government has announced a record 37pc increase in salaries of all those employees who did not take special allowances from the Government.
Finance Minister, Taimur Salim Jhagra announced that minimum wages of laborers and daily wagers were being increased to Rs21, 000.
The provincial government has proposed zero taxation for Registration Fee, Capital Value Tax (CVT) fee, agriculture income tax, and professional tax.
The government has also proposed to increase the rate of taxation for tobacco development cess, stamp duties fee, motor vehicle tax, infrastructure development cess, and General Service Tax (GST).
The budget documents show that the provincial government has decided to improve Pakhtunkhwa’s own-source revenue generation.
KP budget 2021-22 has set a record revenue target of Rs 75 billion which is 50% more than FY2020-21.
He said two innovative approaches ‘development plus budget’ and ‘service delivery budget’ were being introduced under which Rs500 billion would be spent on former focusing on mega projects such as Sehat Plus Cards, provision of furniture to Govt schools and increase in medicines budget to public sector hospitals while Rs424 billion out of Rs747 billion would be spent on the latter with priorities to payment of salaries of doctors, nurses, and teachers besides provision of medicines to hospitals and fuels to Rescue1122 ambulances. The salaries of all government employees except those who didn’t get special allowances are being increased to 37% including a 20% increase in functional or sectoral allowance, 10% increase in Adhoc Relief allowance, 7% in house rent for those employees who don’t benefit from the government’s accommodation scheme.
Jhagra said 100% increase in pension expenditure has been witnessed in the last couple of years and the share of pensions, which was only 1% in 2003-04 had jumped to record 13.8 percent of the total budget in 2021-22.
Provincial Minister for Finance, Taimur Salim Jhagra during his budget speech informed the house that the government would spend Rs 1.7 billion rupees to enhance healthcare facilities in 200 BHUs and to strengthen all BHUs of the province.

He said that Rs 800,000 would be spent on upgrading the basic structure, Rs 450,000 on purchase of medicines and necessary equipment and Rs 1.3 million to improve service delivery. Similarly, Rs one billion would be spent on provision of needed facilities in 50 Rural Health Centers (RHC) and strengthening of all the RHCs in various areas of the province.
Minister informed the house that Rs 1.2 million would be spent on improvement of infrastructure of RHC, Rs1.5 million to purchase medicines and Rs 2.6 million to improve service delivery.
In the education sector, KP under the budget FY 2021-22 has exempted admission fee for both government primary and secondary education schools for girls and boys, coupled with free admissions to professional government Art Colleges.
In the case of Higher Education Archives & Libraries, multiple fees have been annulled to benefit the students intending to enroll for higher studies in government institutions. Three subheads would be removed to ensure free hostels are available for governmental higher education facilities with completely free access to libraries and archives.
The provincial government has also announced exemption of visit fee collected in museums of the province.
Taimur Saleem Jhagra said that a record provincial allocation to the ADP 2021-22 of Rs 150 billion, and a total Development Budget size of Rs 371 billion is greater in proportion than the governments of Sindh and Punjab.
The budget 2021-22 stands on five main pillars including a record increase in salaries of government employees, development budget, devoted services to people, increasing KP’s own resource revenue and introduction of goal-oriented reforms and innovation in the overall governance system.