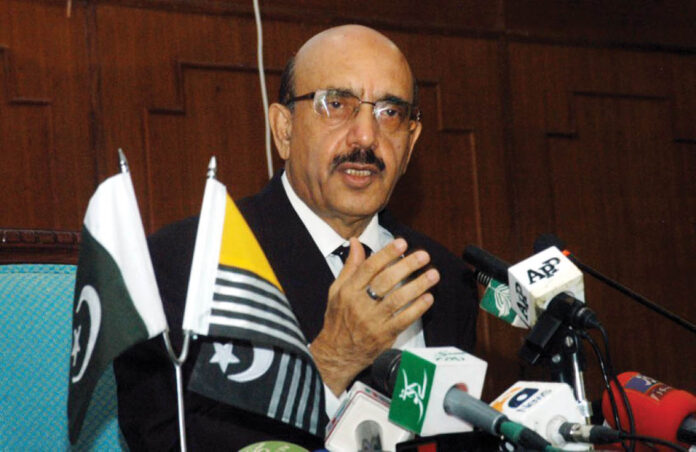 MUZAFFARABAD
Welcoming the letter from the members of the European Parliament to the European Commission and the foreign minister of the European Union (EU) on the serious human rights situation in Occupied Jammu and Kashmir, Azad Jammu & Kashmir (AJK) President Sardar Masood Khan has said that India can no longer hide its crimes from the international community.
Commenting on a joint letter written by sixteen members of European Parliament (MEPs) and sent out to the President of the Commission Ursula Von Der Leyen and the Vice President of the Commission Josep Borrell, President Masood thanked the MEPs for their latest move to raise voice against the violations of human rights in occupied Kashmir.
The state president also commended the Chairman Kashmir Council, EU, Ali Raza Syed and the role of the Pakistani and Kashmiri community in Europe for their effective campaign to highlight the Kashmir issue in Europe and European Parliament through their elected representatives.
He said that the MEPs very rightly conveyed to the EU officials their grave concerns at the abuses of human rights and the state of fundamental freedoms in the Indian Illegally Occupied Jammu and Kashmir (IIOJK).
The president said that the fact is that the situation in IIOJK is not just confined to human rights violations but systematic genocide is going on there as the 900,000 Indian troops are using their unbridled powers under black laws to commit war crimes and crimes against humanity.
He said that young people in the occupied territory are being branded as terrorists, killed in fake encounters, injured, and maimed in the cordon and search operations. After August 2019, thousands of young people were arrested and locked up in various jails in IOJK and India.
He went on to say that the brutal incidents against men, women, and even children and senior citizens continue, while the entire leadership in IIOJK has been arrested and put behind bars for demanding the right to self-determination.
He said that the people of IIOJK have been under military siege for the last two years and their basic and civil rights have been taken away and now the situation is that India has illegally deported more than four million Hindus in the last year and launched a nefarious project to turn the majority of Muslims into a minority by settling non-Kashmiri Hindus in the occupied state.
Masood appealed to the head of Kashmir Council EU, Syed Ali Raza, and the Kashmiri and Pakistani community to hold meetings, processions and seminars on August 5, on completion of two years of the Indian government’s illegal actions in IIOJK, and condemn Indian actions and draw the attention of the international community towards the human rights situation in IIOJK.