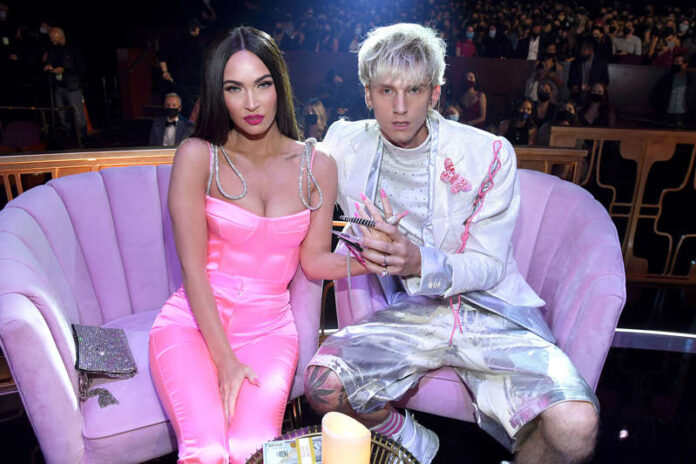 Megan Fox has claimed her relationship with Machine Gun Kelly is “handled” by the “spirits and energies” of their ancestors.

The 35-year-old actress has been dating the 31-year-old rapper since last May, and she believes their “souls are intertwined” by a higher power.

In an interview for CR Fashion Book, she said: “I think part [of our connection] comes naturally because our relationship is so karmic that our spirit, our souls, are so intertwined on that higher plane, a lot of it is handled for us by our ancestors and the spirits and energies that are watching over us.”

Meanwhile, the ‘Jennifer’s Body’ star and the ‘Bloody Valentine’ rocker recently gave fans an insight into their rampant sex life, as Megan confessed the pair made love on top of the dinner table at their rented holiday home.

The movie star teased that she and MGK got down and dirty on the stone marble kitchen island at the apartment they hired through Airbnb on a romantic getaway recently.

Taking to her Instagram account, the ‘Transformers’ star uploaded a seductive photograph of her in a bra, a mini skirt and a pair of sexy heels while leaning against their favourite sexual prop and wrote: “When I tell you that the table at this air bnb saw some things (sic)”

Machine Gun Kelly set tongues wagging even more when he commented underneath: “I’m really glad that’s not our table anymore.”

The couple have been very open about their relationship since they started dating and the brunette beauty even admitted that she knew the ‘Dirt’ star was her soulmate “instantly” after they met on the set of their movie ‘Midnight in the Switchgrass’.

And Megan recently gave her boyfriend a vial of her blood on a necklace so he wouldn’t miss her when she went out of the country for a film role.

Explaining her gift, he said: “Well, she was actually going out of town to film a movie. This was really new in our relationship. I didn’t have a passport either. So, she was going out to Bulgaria so I was kind of freaking out, like, ‘You’re gonna leave and I can’t even come see you.’ Some people give, like, a handkerchief to their partner or whatever. She gave me her DNA.”