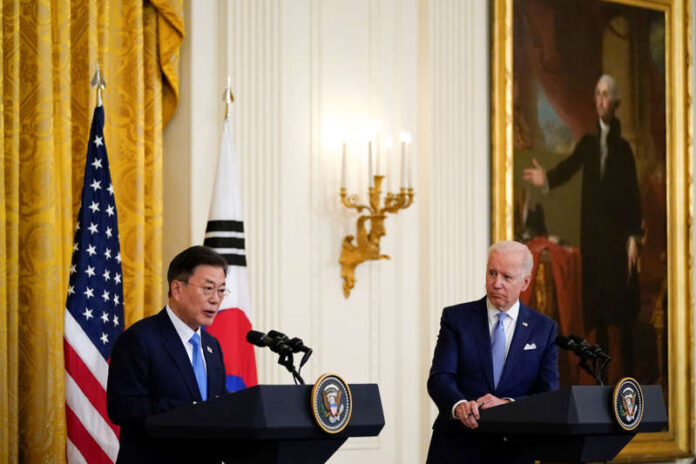 SEOUL — North Korea on Monday criticized the United States for ending restrictions on South Korea’s missile development, calling it a “deliberate and hostile act” that could lead to an “acute and instable situation” on the Korean Peninsula.

The statement was Pyongyang’s first public reaction to the May 21 summit in Washington between President Biden and his South Korean counterpart, President Moon Jae-in.

The two leaders agreed to abolish guidelines dating to 1979 that had capped Seoul’s development of missiles to a range of 800 kilometers (500 miles). The termination of the missile pact, which was put in place to avoid a regional arms race, expands Seoul’s ability to target the North.

“The termination step is a stark reminder of the U.S. hostile policy toward the DPRK and its shameful double-dealing,” said the statement carried on North Korea’s official Korean Central News Agency, which used the country’s official name of the Democratic People’s Republic of Korea.

In April, the Biden administration completed a months-long review of U.S. policy toward Korea that sought to avoid the “grand bargain” approach of former president Donald Trump and the “strategic patience” of his predecessor Barack Obama, said White House press secretary Jen Psaki.

During a speech to a joint session of Congress in April, Biden characterized his approach as a combination of “diplomacy, as well as stern deterrence.”

Biden also announced the appointment of veteran diplomat Sung Kim as special envoy to North Korea at the summit. Talks over Pyongyang’s nuclear program have been stalled since 2019.

In its statement Monday, which was attributed to an unaffiliated “international affairs critic” named Kim Myong Chol, Pyongyang said that Washington was “engrossed in confrontation despite its lip-service to dialogue.”

By not assigning the message to a governmental body, North Korea is “signaling that there is still room for dialogue” with the Biden administration, said Yang Moo-jin, a professor at the University of North Korean Studies in Seoul.

North Korea is also issuing a “warning that it could confront the United States and South Korea about … the termination of the missile pact,” Yang said.

“It is a serious blunder for [the United States] to pressurize the DPRK by creating asymmetric imbalance in and around the Korean Peninsula,” wrote Kim, the North Korean commentator. “The U.S. act of giving free ‘missile’ rein to South Korea is all meant to spark off [an] arms race … and check the development of the DPRK.”

The Chinese ambassador to South Korea, Xing Haiming, had said that the missile guidelines were a bilateral matter between Washington and Seoul.

“However, we will not stand still if it does damage to China’s national interest,” Xing told reporters last week.