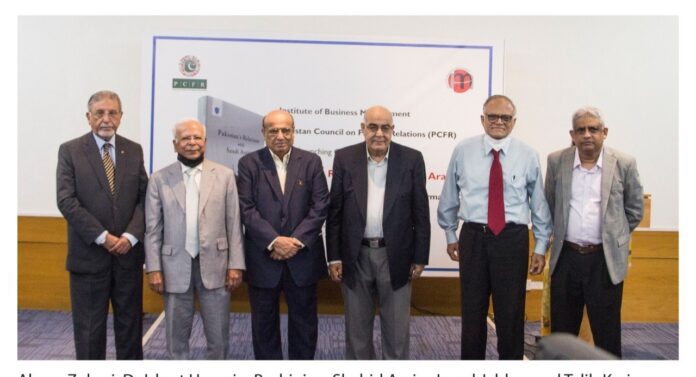 Pakistan-Saudi Arabia relationship is an inextricable one. We are bound by religion, and we are also bound by region, even though we are not immediate neighbors. This was expressed by former senator and information minister Javed Jabbar at the launching ceremony of book titled Pakistan’s Relations with Saudi Arabia by former ambassador Shahid Amin. This inextricability is best narrated by Mr Amin as how King Abdullah related to two Pakistani leaders of completely contrasting characters — Nawaz Sharif and Gen Musharraf. To each of them King Abdullah extended support, empathy, understanding and hard cash. “It shows that bilateral relations are also shaped by individuals.” He also said that there’s ambiguity in the relationship, despite the fact that it’s an inextricable one, particularly for the future. Former special assistant to Prime Minister Dr. Ishrat Hussain also spoke on the occasion, he said “We have to look at the relationships with other countries as a reflection of our internal strength. Our foreign policy is in fact a reflection of our domestic policy. Dr. Hussain also highlighted the messages coming out of the relationship that he has learned from the book. The first was that in 1974 Saudi Arabia became a global power because the oil prices went up. The second was that Saudi Arabia became a regional power through OIC, GCC and the Islamic Development Bank. And the third, he said, was the basic theme of the book: bilateral relations. The author has pointed out that despite billions of dollars in equipment and training of their personnel, Pakistan’s armed forces support remain’s an integral part of bilateral relations.
It started in the 1960s and reached its peak in the 1980s. The Royal [Saudi] Air Force was trained by Pakistan Air Force pilots. “Yes, we have seen ups and downs in the relationship, but compared to other countries the ups have been more than the downs.” Introducing the book, Shahid Amin said it was a project of Shahjehan Karim, the founder of IoBM. Earlier, Talib Karim and Bashir Janmohmmad also spoke. Retired ambassador Alam Brohi delivered the vote of thanks. The event was organised by IoBM in collaboration with the Pakistan Council on Foreign Relations.