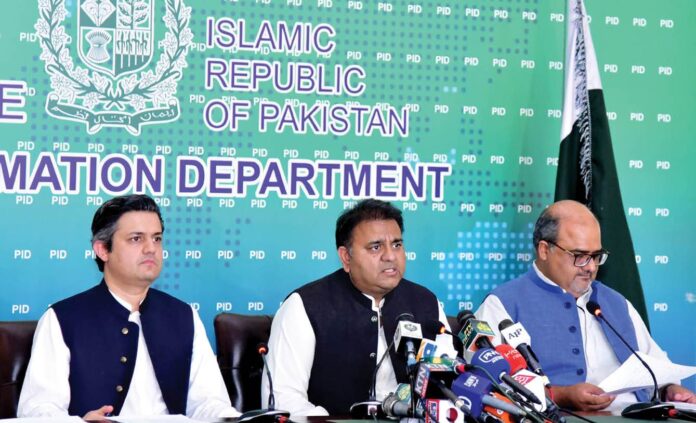 Shehzad rejects Shehbaz’s allegations of FIA harassment: Hammad says no scheduled electricity load shedding
ISLAMABAD
Federal Minister for Information and Broadcasting Fawad Chaudhry has said that Pakistan is in contact with all the Afghan groups for an inclusive government to have peace in Afghanistan.
Addressing a joint press conference along with Minister for Energy Hammad Azhar and Prime Minister’s Advisor on Interior Mirza Shahzad Akbar on Monday, Fawad said the entire world is appreciating Pakistan’s efforts for peace in Afghanistan.
He said the government is pursuing the vision of Prime Minister Imran Khan that Pakistan will be a partner in peace, but not in the conflict.
Talking about the political situation in the country and ongoing election campaign in AJK, Fawad said that the position of Pakistan Tehreek-e-Insaf (PTI) is very strong in AJK, which is evident with the fact that it has fielded candidates in all the constituencies.
He said that Pakistan Peoples Party (PPP) is contesting elections on just eight seats, while Pakistan Muslim League-Nawaz is also not sure about its future in Azad Kashmir.
Regarding the news conference of Pakistan Muslim League-Nawaz (PML-N) President Shahbaz Sharif, Fawad said that the former Punjab Chief Minister should give answer to the allegations of corruption against him instead of pointing fingers towards the government.
Speaking on the occasion, Adviser to Prime Minister on Accountability and Interior Shehzad Akbar hit back at Leader of Opposition in National Assembly Shehbaz Sharif, saying come what may the government will not let him run away from the country.
He rejected Shehbaz Sharif’s allegations that the Federal Investigation Agency (FIA) is harassing him. He said that FIA had served a notice, along with a questionnaire, to answer the allegations of corruption of billions of rupees.
He said Rs25 billion were transacted in the name of 14 employees of two sugar mills, belonging to Shehbaz Sharif and his family, and that amount later on was transferred to the accounts of Shehbaz Sharif and his family members. He asked Shehbaz Sharif to answer all these things instead of maligning state institutions.
“Shehbaz Sharif is facing very serious charges of corruption… with strong evidence presented before the court,” he said. “Don’t try to escape to London. No matter how much you [Shehbaz] try, the government will not let you leave the country,” warned Akbar.
Akbar, in response, also claimed that Shehbaz’s family assets increased by Rs7 billion due to money laundering. He urged Shehbaz to respond to corruption allegations instead of making hue and cry over the accountability process.
Speaking on the occasion, Hammad Azhar said that no scheduled load shedding is taking place in any part of the country. He said that current load shedding is a result of weak power transmission system.
He said that the capacity of the existing transmission system is 24,000 megawatts of electricity. He said the government is working on improving the transmission system and it has so far enhanced its capacity from 20,000 to 24,000 megawatts.