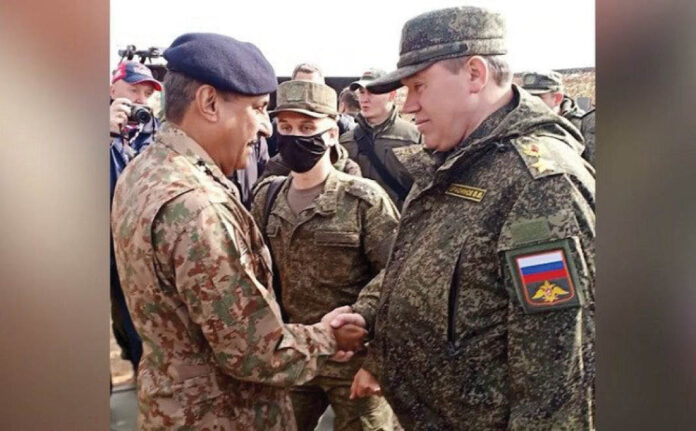 Pakistan will continue to work with SCO to advance objectives for peace: Gen Nadeem
RAWALPINDI
Chairman Joint Chiefs of Staff Committee (CJCSC) General Nadeem Raza has said that peace in Afghanistan is a collective responsibility and the entire region will benefit from stability in the war-torn country.
The high-ranking officer is currently on a visit to Russia to witness Exercise Peace Mission-2021 under the ambit of the Shanghai Cooperation Organisation (SCO), said the Inter-Services Publis Relations (ISPR) in a statement released on Saturday.
The JCSC chairman also attended a meeting of the Chiefs of General Staff of the Armed Forces of SCO member states, during which the activities of “transnational terrorist organizations in various regions of the world” were discussed.
The forum discussed the international and regional geo-political environment and General Nadeem, while addressing the participants, stated that Pakistan will continue to work with the SCO “to advance the shared objectives of peace, progress and stability in the region, and beyond”.
He further highlighted the contributions of the armed forces of Pakistan towards global peace and the sacrifices made by the country in the war against terrorism, added the ISPR statement.
On the sidelines of the meeting, General Nadeem met the Russian Chief of General Staff General Valery V. Gerasimov and the chief of joint staff of the Peoples Liberation Army General Li Zuocheng and informed them of Pakistan focus on furthering bilateral defence cooperation with China and Russia.
General Nadeem also said the Islamabad believes that a meaningful and long-term strategic relationship through enhanced cooperation can be developed with Moscow and Beijing.
Earlier, a contingent of Pakistan Army participated in the opening ceremony of the exercise under the ambit of SCO held at Donguz training area, Orenburg region in Russia.
ISPR had said that a tri-services contingent of the Pakistan Army participated in the military drills.
The exercise was focused on anti-terrorist operations and best practices in the counter-terrorism domain.