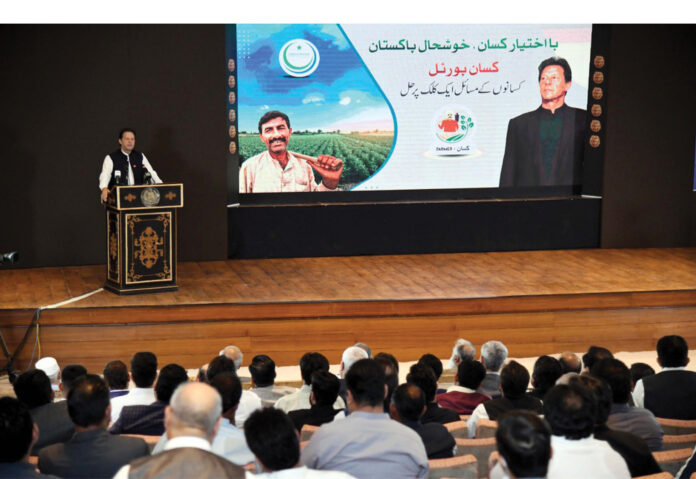 ISLAMABAD
Prime Minister Imran Khan on Friday said his vision for the promotion of the agriculture sector was focused on bringing improvement in the life of small farmers and resolving their grievances on priority.
Addressing the launch of Kisaan Portal, at the Pakistan Citizen Portal, he assured the farmers that the government would stand by them, as he believed that “serving the farming community was in fact a service to Pakistan”.
Imran Khan said his government was focusing on agricultural research particularly seed development to increase the yield of crops.
Also, he said, the yield of the dairy sector in the developed world was six times higher than in Pakistan and emphasized development to boost production in this sector.
He stressed the importance of water conservation to ensure ample supply to farmers for irrigation purposes. The construction of 10 big dams, he said, was an unprecedented step taken by his government. He said work on several projects was underway and was aimed at addressing the water needs of the country, the common man and the farmers, he added.
The prime minister said the world over, the agriculture sector had an insurance cover. He said the Kisaan card would enable the small farmers t get financial support in case their yield was damaged from natural calamities.
He said the pressure on the Pakistani rupee was temporary and would be over soon.
He said the price of palm oil had become almost doubled in the international market and had a negative impact on the rates in Pakistan.
Similarly, he said, Pakistan had to import wheat, sugar and pulses.
The prime minister said with the government’s efforts, the country would witness a revolution in the production of soya bean, olive oil and avocado.
He said training programmes for farmers were on the cards with the assistance of China to guide them on better farming techniques.
Imran Khan said Pakistan was blessed with natural resources, which if properly utilized through scientific means, could result in a boom in the agriculture sector.
PM’s Special Assistant Jamshed Iqbal Cheema said under the government’s initiative, the farmers would get subsidies on seeds, fertilizers and the purchase of agricultural machinery.
He said the government was focusing on rural development with the uplift of farmers and giving them better support prices for their produce.
He said the budget for the agriculture sector had been doubled at federal and provincial levels.