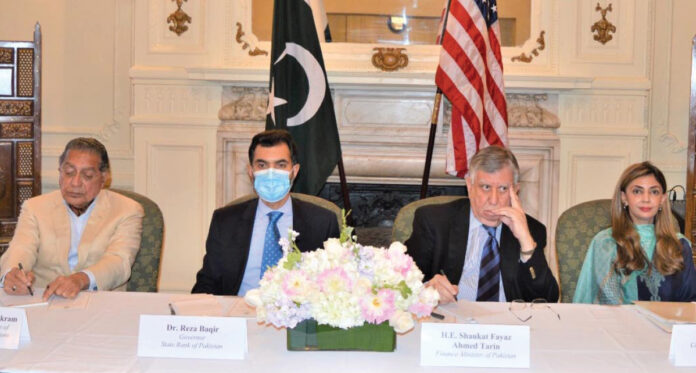 Terms meetings with IMF chief, others “useful and positive”
NEW YORK
Adviser to the PM on Finance Shaukat Tarin has reaffirmed the government’s resolve to provide seamless financial services to the Pakistani diaspora spread across the world.
Speaking at an event organised by the Consulate General of Pakistan in New York regarding Roshan Digital Accounts (RDA), Tarin said that various reforms are being taken by the government to ensure sustainable and inclusive development of Pakistan’s economy.
The adviser also encouraged Pakistani-Americans to utilise the facilities presented by Roshan Digital Accounts. He said that diaspora is the backbone of Pakistan’s economy, urging the overseas Pakistanis to open Roshan Digital Accounts, which offers several products. He commended the valuable contribution of Pakistani Americans and affirmed full support and facilitation on the occasion.
Speaking on the occasion, Governor State Bank of Pakistan (SBP), Dr Raza Baqir briefed about the RDA initiative by the government and encouraged expatriates to take advantage of the scheme. He assured the members of the diaspora that innovation in the banking sector to facilitate overseas Pakistanis, is a foremost institutional priority for SBP.
Later talking to the media persons, Shaukat Tarin dismissed reports that the talks between Pakistan and the International Monetary Fund (IMF) for the resumption of $6 billion Extended Fund Facility (EFF) have failed, asserting that they are headed in a positive direction. “The talks are continuing,” Tarin added. “I don’t know what’s the basis on which an impression has been given by some that the talks have failed— they are totally wrong,” he said. At this stage, the finance minister said, final details are being worked out and the negotiations would, inshaAllah, conclude successfully.
Tarin said Finance Secretary Yusuf Khan is still in Washington pursuing the talks with relevant IMF officials, and that he is in contact with the FBR chairman as well as with him for any advice.
There is an atmosphere of positivity and the next few days would show a productive outcome from the talks, he said. In this regard, he said his meeting with IMF Managing Director Kristalina Georgieva and other fund officials were also very “useful and positive.”
“The nation shouldn’t be disillusioned by some unfounded negative reports,” the finance minister added.
When asked whether the IMF is demanding that Pakistan should do more, Tarin said that every banker would ask for when someone applies for a loan. Pakistan, he said, has its red lines to protect its interests, although it has been made clear that the government would pursue the reform process for sustainable growth.

The advisor is in the United States where, besides the loan talks, he attended the annual meetings of the IMF and the World Bank. TLTP