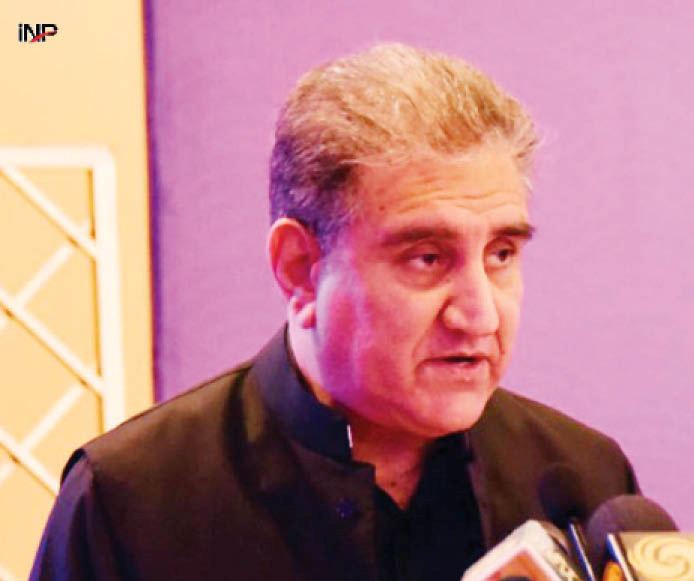 Foreign Minister (FM) Shah Mehmood Qureshi has said world powers should release the assets worth billion of dollars to Afghanistan which were frozen.
“India not only rejected peace offer by Prime Minister (PM) Imran Khan but also took unilateral steps in Occupied Kashmir on August 05, 2019 which led the region to destabilization.
He said this while talking to international press reporters in Pakistan House in New York.

Foreign Minister Shah Mahmood Qureshi spoke about Afghanistan upon his arrival in New York to attend the 76th session of the United Nations General Assembly.
He also gave replies to the questions from the journalists besides explaining Pakistan stance on crucial regional and international issues and exchanging views on the situation in Afghanistan.

He remarked Afghan citizens have faced war since the last four decades Now hope has risen for peace in Afghanistan .. The international community should not abandon Afghan people at this critical juncture of time. A peaceful Afghanistan will be in the interest of the entire region.
Ahead of talks on Afghanistan at the UN General Assembly, Shah Mehmood Qureshi said the immediate priority was to prevent an economic crisis in Afghanistan, which could lead to widespread destruction.
He said freezing assets is not a solution for the Taliban. He urged that world powers should reconsider their policy and unblock the assets. It will be a confidence-building measure that will encourage positive behaviour.
The United States has frozen $9.5 billion of Afghan central bank assets, and international investors are reluctant to loosen their grip because they are afraid that their money will be used by the Taliban.
The federal minister said it was too early to establish regular relationships with Afghanistan’s new interim government. Nobody was in a hurry to recognize the Taliban’s government at the moment but they should keep an eye on it, he said.
“If the Taliban wants to recognize their government, they must accept international opinions.”

Foreign Minister Shah Mahmood Qureshi has reaffirmed Pakistan’s desire for the establishment of an inclusive government in Afghanistan.
.
He said Pakistan extended full assistance in the evacuation of foreign nationals from Afghanistan.
The Foreign Minister said despite limited resources, Pakistan has been hosting three million Afghan refugees over the last four decades.
As regards the situation in Indian illegally occupied Jammu and Kashmir, Shah Mahmood Qureshi said the situation there has further complicated as a result of India’s unilateral and illegal steps of 5th August 2019.
.

He observed the statements given by Taliban initially are encouraging. The statements from Taliban on end to war, general pardon, upholding the fundamental rights and protection of women rights are very encouraging.
He demanded of world powers to unfreeze freezed assets of Afghanistan saying on one hand you are collecting funds afresh to prevent crisis and on the other hand the Afghanis can not use their assets, Freezing the assets is not solution to problem.

The world powers should once again review their policy and think about unfreezing the assets, he said adding the unblocking assets can serve crucial step towards confidence building.

We are desirous of peace. Option is still there with India today. If it wants peace in region it should stop ongoing atrocities against people of Kashmir and withdraw August 5, 2019 unconstitutional steps., he held.

Who Is Zalmay Khalilzad? Biden’s Envoy for Afghanistan Resigns After Messy...