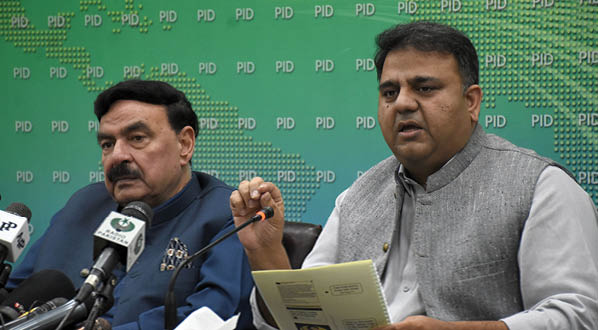 Singapore was given location of threat: Information Minister
ISLAMABAD
Information Minister Fawad Chaudhry has said that fake account were worked out in India and threat came from India to New Zealand cricket team while Singapore was given the location of the threat.
He said this while addressing a joint press conference here Wednesday along with interior minister Sheikh Rashid Ahmad.
According to details, on August 19, 2021 a face book post came to open in the name of Ahsan Ullah Ahsan.
It was said in the post ISKP can target New Zealand cricket team. An article was written in Indian news paper Sunday Guardian on the basis of Ahsan Ullah Ahsan post.
An e-mail is made to wife of Morten capital, on August 24, 2021 wherein it was said that her husband can be targeted in Pakistan.
This E-Mail account was also developed on August 24. Only one mail has been generated from this mail account. Proton web server account was developed which is considered secure.”, he remarked.
We have requested Interpol for details wit h reference to it. It was said in the page that the extremist parties can target the TEAM .
The Indian journalist said in the article in fake book page New Zealand can be targeted. The article and both the pages pertain to former Afghan vice president Amar Ullah Saleh. New Zealand team arrived in Pakistan through chartered plane on September 12. Abi Nandan Mishra wrote an article in Guardian with reference to this tweet.
It was said in the article New Zealand team is facing threat. E-Mail ID was developed on the G-Mail in the name of Hamza Afridi. After 15 minutes of developing the E-Mail ID threatening message was sent to New Zealand team. Threat to New Zealand team was given from India but location was given of Singapore”, he added.
He stated “ Hamza Afridi e-mail was developed through IDVP N in India. Hamza Afridi name was used for the reason to indicate threat has been given from Pakistan. Threatening message was sent to New Zealand team from Mumbai Maharashter. The device on which ID in the name of Hamza Afridi was developed, 13 IDs already exist thereon. West Indies team has also to visit Pakistan in December.
A threatening message has also been sent to this team. The threat was issued to West Indies team from Ahsan Ullah Ahsan ID too.
In the spelling of Ahsan Ullah Ahsan sheen was used. Tweets were sent from india during Tehreek-e-Labaik movement.
He underlined “we asked from New Zealand security team to share that threat with us. But New Zealand team was unaware of the threat. The threat could not be shared. New Zealand Prime Minister said that team was cancelling its tour due to threat and this is serious threat.
He went on to say Pakistan is facing fifth generation war. Warfare was established against Pakistan. Powerful agencies and states play this game. People are used in the fifth generation war but they remain unaware of it.
He underscored the threat to teams is not against Pakistan but it is a conspiracy against international cricket. Today FIA has registered a case. Chairman PCB Rameez Raja too will take up this matter on his own. Government of Pakistan will too take up this matter.
ICC should take notice of this threat. New Zealand should share threat with us. The entire world expressed solidarity with Pakistan. Prime Minister Imran Khan talked to New Zealand prime minister in this regard. All the threats hurled on New Zealand tame stemmed from India.
He held that PTV Sports has been asked to assess the loss caused due to cancellation of visit of New Zealand cricket team.
Interior Minister Sheikh Rashid said the impression of isolating Pakistan due to cancellation of visit of New Zealand team is wrong.
We cannot be isolated. We are determined. I had already said that England cricket team will not visit Pakistan. IMF and other authorities were also there where New Zealand team was staying. One day will come when team from all over the world will come to Pakistan to play cricket.