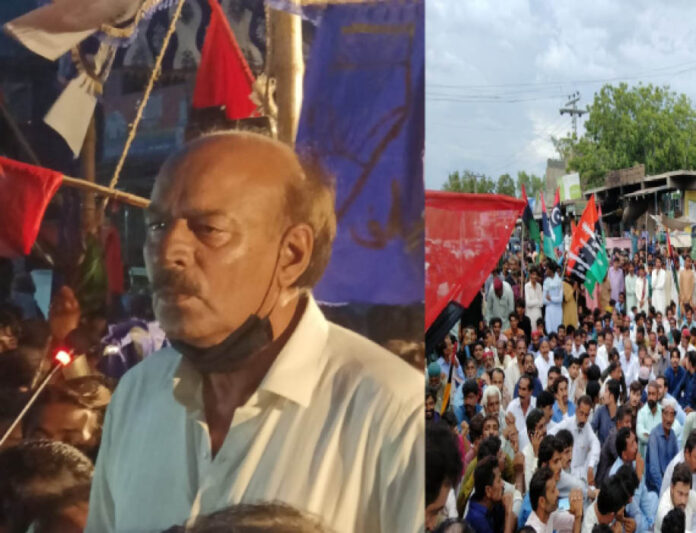 SUJAWAL
A large number of Pakistan Peoples Party supporters, workers and members of its sister organizations including PSF and Peoples Doctors forum gathered in Sujawal the district headquarters to protest against the policies of the PTI government that according to them were anti-people policies.
PPP Sindh President Nisar Ahmed Khurro, MNA Ayaz Shah Shirazi, MPA Mohammad Ali Malkani, MPA Heero Suho, and Deputy Speaker Rehana Laghari led the anti-government protest and said that the PTI government had failed to provide relief to the poor masses of this country as the financial crisis in the country had gone from bad to worse.
Nisar Khurro said that the ill-planned and unwise policies of the “selected” government had led to all sorts of crises in this country. Adding that back-breaking inflation would not prove beneficial for bringing the country out of the “Fiscal Crisis” that he said had aggravated ever since the PTI-led government had come into power.
Mohammad Ali Malkani said that during the whole season this year the growers of Sindh could not get their due share of water owing to the unjustified policies of IRSA and the federal government that resulted in a massive economical loss for the growers. Hue and cry had been raised against Khan from every nook and corner of the country over his failure to put the country on the path of so-called “Change”. he mentioned.
Skyrocketing prices of fuel and basic commodities had proved that things were not in the control of the Federal Government and all of them were acting like mere puppets. said Heer Suho. She further said that under an explicit conspiracy around 1600 employees of Sui Southern Guess had been sacked by the federal government without arranging any alternative source for them. The injustice with SInh over the issue of the NFC Award would also not be tolerated.
The party leaders announced to continue the anti-federal government protests across the province.