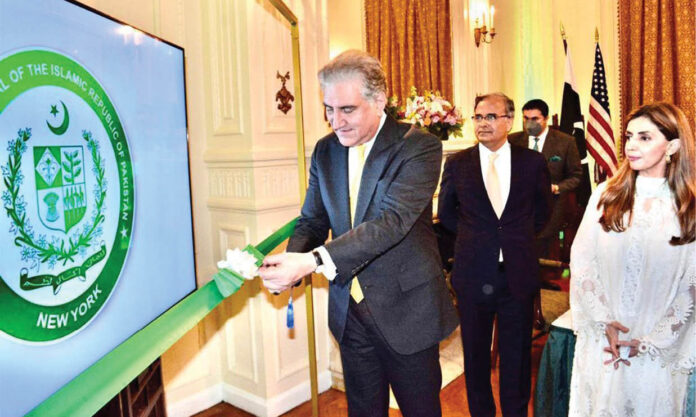 NEW YORK
Foreign Minister Shah Mahmood Qureshi Tuesday regretted that the United States has not recognized Pakistan’s supportive role during Afghanistan-related developments, saying “No matter what we do. It’s never enough.”
Asked by a Pakistani journalist at a news briefing whether Washington is still pushing Pakistan to “do more”, he said, “Unfortunately, we have not been recognized for having done what we have done (instead) fingers have been pointed at us.”
The briefing, organized by New York-based Foreign Press Association (FPA), was moderated by its president, Ian Williams. Elaborating, FM Qureshi said when the U.S. wanted to come into negotiations with the Taliban, Pakistan helped and brought them to the negotiating table.
“When they wanted safe passage for people to leave Afghanistan in safety — we helped,” he said. Pakistan, Qureshi said, was also willing to help in the distribution of humanitarian aid. “We are willing, we will be offering to help …
Pakistan can be that hub for distribution of assistance.” “Tell us, what can we do more, that we have not done,” the foreign minister posed the question. “For far too long — and believe you me, it is not helpful for someone who is trying to build a healthy bilateral relationship,” he said, while underscoring Pakistan’s importance for United States.
“How many friends do they have in that region — just look around and see — and its Pakistan, that has been supportive and helpful,” the Foreign Minister said. “If you keep pushing us into the corner, then a (time) will come when Pakistanis feel that no matter what we do, it’s impossible to please them, as they keep shifting the goalposts. And if that sinks in.
It wouldn’t be helpful for the relationship.” Replying to a question about the nomination of Taliban’s Doha-based spokesman Suhail Shaheen as Afghanistan’s ambassador to the UN, the foreign minister said the issue will be decided by UN’s Credentials Committee, as the government in Kabul is yet to be recognized.
At the same time, he pointed out that the person, currently accredited to the UN (Ghulam Isaczai, the ambassador appointed by the ousted Ashraf Ghani regime), is not recognized by the authorities in Kabul. “So it’s a fairly complicated situation,” FM Qureshi said. “it’s an evolving situation, and a decision will have to be taken by the appropriate committee — the Credentials Committee”.
In the course of briefing, the foreign minister also urged the international community to engage with the Taliban in an effort to encourage progress towards a more inclusive government in Afghanistan, noting the expanded cabinet announced Tuesday. While the Taliban should be held to their commitments on counter-terrorism, human rights, and political inclusivity, the immediate priority must be to help the Afghan people as they confronted a potential humanitarian crisis, he said.