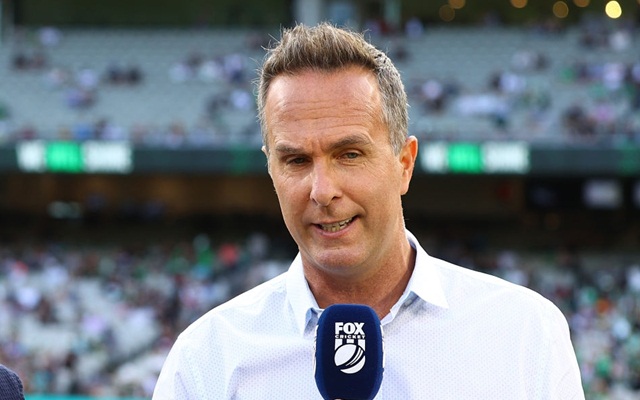 London
England’s squad depth and variety should make them favourites to win the T20 World Cup this year, says former English captain Michael Vaughan.
England, experimenting without several first-choice players against Pakistan, won Sunday’s second match by 45 runs to level the three-match series at 1-1.
“England have put themselves in a great position because they’ve got absolutely everything covered,” said Vaughan.
The World Cup in the United Arab Emirates and Oman starts in October.
England bounced back in style from defeat in the opening game of the three-match series on Friday.
Already without first-choice regulars Jofra Archer, Mark Wood, Ben Stokes and Sam Curran, the hosts rested captain Eoin Morgan at Headingley.
With Jos Buttler leading the team in his first match for a month after a calf injury, England moved Jonny Bairstow down to number six in the batting order and used Moeen Ali’s off-spin for more than one over for the first time in a T20 since February last year.
Liam Livingstone followed up a 42-ball hundred on Friday with 38 from 23 balls, while Matt Parkinson played in the same England team as Adil Rashid for the first time.
The leg-spinners and Moeen claimed combined figures of 5-87 from 11 overs on a pitch where England amassed 200.
Pace bowler Saqib Mahmood – so impressive in the 3-0 one-day series win over Pakistan – continued his fine white-ball summer with 3-33 to limit Pakistan to 155-9 in reply.
“The competition for places is very strong,” said Moeen, who hit 36 from 16 balls and took 2-32 from three overs to be named man of the match.
“There are so many players in and out of the team. It keeps you on your toes and nothing is a given.
“You have to work hard and perform. It’s brilliant for our white-ball set-up.”
England, the reigning 50-over world champions, were beaten by West Indies in the final of the previous T20 World Cup in 2016.
The series decider against Pakistan at Old Trafford on Tuesday is their final T20 before they name their World Cup squad.
“The best teams have the strongest squad,” England Test fast bowler James Anderson said on BBC One.
“If you’re going to a World Cup, you need 15 or 16 players who can perform on any given day.
“The more players they know that can go out there and perform on this stage, the better. It’s a great headache to have.”
Lancashire’s Livingstone hit two sixes out of Headingley, with the second, a straight hit off pace bowler Haris Rauf, clearing the new stand and heading for the rugby ground.
“He’s becoming a class act,” said Vaughan.
“The hundred he got on Friday will have given him a huge amount of confidence and he was well on his way again today before he was run out.
“He’s one we’re going to see a lot of over the next few years.”