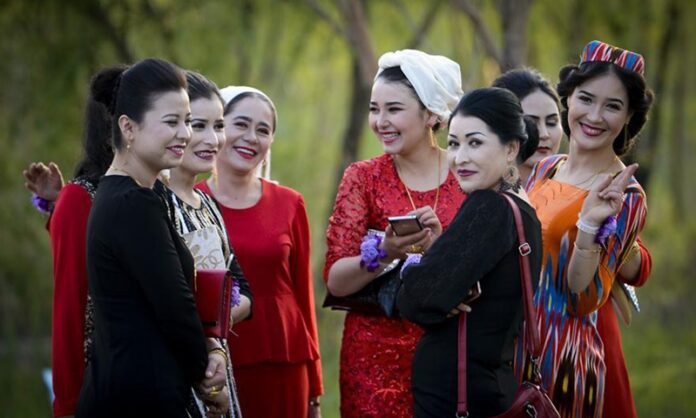 Northwest China’s Xinjiang Uygur autonomous region has constantly registered an increase in its input in education, effectively lifting the literacy of its population, especially the ethnic minorities in the region, pointed out a white paper titled “Xinjiang Population Dynamics and Data” released recently by the State Council Information Office of China.
Population constitutes the basic support for the country’s modernization drive and the engine of economic and social development. As China’s demographic landscape and stage of economic and social development change, increasing education investment and improving the literacy of people have become increasingly important.
The average years of schooling for people aged 15 and above in Xinjiang rose from 9.27 years in 2010 to 10.11 years in 2020, 0.2 years higher than the national average of 9.91, and ranking 10th across the nation. The illiteracy rate of people in Xinjiang declined to 2.66 percent, lower that the country’s national average.
Compared with 2010, the number of people with university education rose from 10,613 to 16,536 per 100,000 persons, and those with high school education grew from 11,669 to 13,208.
It should be noted that the education level of the ethnic minorities in Xinjiang, especially the Uygur population which comprises 44.96 percent of the total population of the region as well as 77.85 percent of the population of its ethnic minorities, has continuously improved.
According to data from the seventh national census conducted in 2020, 8,944 per 100,000 Uygur people received a university education, an increase of 272 percent compared to 2000. The average years in education for those aged 15 and above grew to 9.19 in 2020 from 7.06 two decades ago.
These facts fully prove that the education level and literacy of people of all ethnic groups in Xinjiang have continuously improved, thanks to the region’s efforts to put into practice various policies to promote education, increase fiscal funds for education, accelerate the construction of a high-quality education system, and deepen educational cooperation with developed regions in China.
The Education Law of the People’s Republic of China stipulates that the state shall help all ethnic minority areas develop educational undertakings in light of the characteristics and needs of different ethnic minority groups.
In recent years, the country has formulated and issued a document on speeding up national education development and an implementation plan for lifting severely impoverished areas out of poverty by improving education from 2018 to 2020, intensifying efforts to promote education for ethnic minority areas and poverty-stricken areas through preferential policies.
Xinjiang has exempted some tuition fees and provided subsidies for students receiving the nine-year compulsory education and vocational education and implemented comprehensive financial aid policies for higher education receivers to ensure that students from financially embarrassed families can receive education.
With the support of the central government, Xinjiang has increased investment into education and made it a priority area of its fiscal expenditure, gradually completing mechanisms for input of educational funds at all levels.
In 2019, Xinjiang’s general government spending on education totaled over 86.3 billion yuan ($13.38 billion). As of the end of 2019, Xinjiang had invested a total of 26.3 billion yuan in the construction of basic education facilities and renovated and expanded 9.13 million square meters of school buildings. Over half of the investment was used in four poor prefectures in southern Xinjiang. All the schools for compulsory education in these prefectures have reached the required basic standards for normal operation.
Upholding the concept that “education comes first” ,Xinjiang has further deepened education reform based on its actual needs, in which the region has made preschool education accessible to more, developed compulsory education in a balanced manner, promoted universal senior high school education, improved the quality of vocational education and vigorously advanced higher education development.