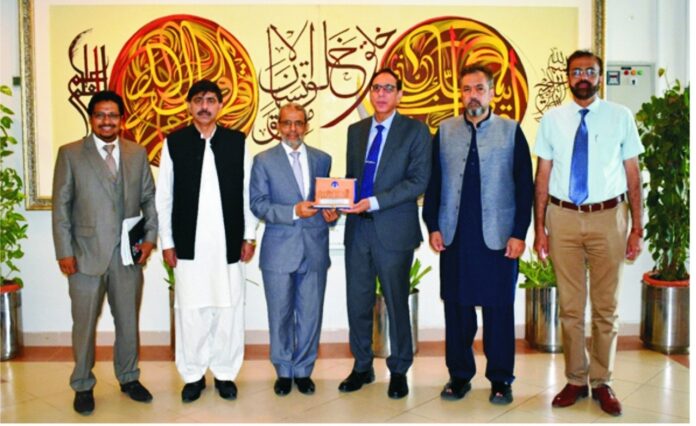 Islamabad
Islamabad, Mohammed Motahar Alashabi, Ambassador Extraordinary and Plenipotentiary of the Republic of Yemen to the Islamic Republic of Pakistan called on Prof. Dr. Muhammad T. Afzal, Rector, COMSATS University Islamabad to discuss enhanced academic cooperation and research exchanges between Yemen and COMSATS University.
He was accompanied by Dr. AbdulRahman Al-Salehi, Educational and Cultural Attaché, Embassy of Yemen in Islamabad.
During the meeting, the Yemeni Ambassador iterated the cordial relations between Pakistan and Yemen, particularly in education and scientific research and emphasized on enhancing collaboration between the universities of the two brotherly nations.
He said that the cooperation can take the shape of joint research projects, capacity building and training programs for faculty members and exchange of experts.
Prof. Dr. Muhammad T. Afzal, Rector CUI said that as host of the COMSTECH Inter-Islamic Network on Information Technology – INIT, COMSATS University would like to extend its expertise in Information Communication Technologies, Cyber Security and Artificial Intelligence towards modernizing Yemen.
He said that a standing offer of 100 COMSATS University post graduate scholarships for OIC Member Countries can also be availed by Yemeni students. Moreover, post-doctoral research opportunities for faculty members from OIC member countries can also be arranged at CUI through various funding sources.
As the President of INIT, Prof. Afzal stressed the need for holding joint capacity building events for uplifting the Muslim Ummah in cutting edge technologies as well as developing linkages between research centers of the OIC countries.
Motahar Alashabi recalled that CUI had rendered technical expertise for the establishment of a University of Science and Technology in Yemen.
A feasibility study for establishing a Science and Technology University prepared by CUI was presented to the Ambassador.
Prof. Afzal said that CUI may facilitate in the opening of a campus in Yemen with the support of its government. The Ambassador was informed that CUI is a top ranked public sector university of Pakistan which was ranked among top 501-600 in Physical Sciences and 601-800 in Life Sciences and consistently ranked Number 1 in Pakistan on the Nature Index.
Other senior officials present in the meeting included Prof. Dr. Sajjad Madani, Registrar CUI, Dr. Tahir Naeem, Director P&D and HRD, Mr. Ali Tawab, Head International Office.