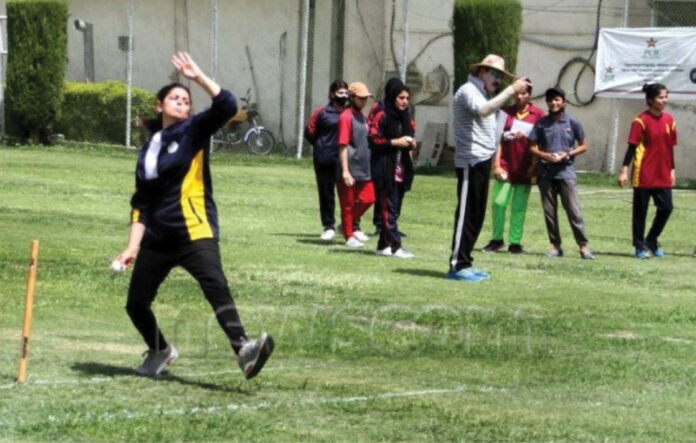 PESHAWAR
Preparation for the most talkative and upcoming Women U19 World Cricket Cup and Women Premier Cricket League a talent hunt and trials were held under the aegis of Pakistan Cricket Board here at Maazullah Khan Cricket Academy here Thursday.
More than 110 female young cricket aspirants turned up for a day-long trials-cum-talent hung with top Pakistan female Level-III coach Hajra Sawar monitoring the performance of the players. Young female cricket aspirants from Peshawar Region, Southern and integrated districts across Khyber Pakhtunkhwa enthusiastically went through different sessions including batting, bowling, all-rounder and fielding.
Cricket Coaches including Hajra Sawar, a former cricketer, who had her Level-III cricket coaching from Australia, another prominent cricketer and now coach Rehmat Gul, PCB coach and representative Assistant Manager Cricket Development, Sharjeel have thoroughly monitored the performance of the female players turned up for the trials even from far flung areas including Chitral, Dera Ismail Khan, Mohmand District, Khyber District, Swabi, Mardan, Kohat, Bannu, Charsadda, Nowshera and Malakand Division.
Besides here, the trials also held alongside a talent hunt in Post Graduate College Mardan and Talent Hunt-cum-Trials at Abbottabad Cricket Stadium where 60 players in Abbottabad and 68 in Mardan turned up, Hajra Sawar said when asked.
She said Pakistan Cricket Board wants to search out new talent at the grassroots level and that is why it has taken bold steps to have talent hunts and trials for short-listing players for the U19, selecting Emerging and Senior teams.
She disclosed that it is good to have a good number of players who after short-listing would go through rigorous training and coach besides playing trial matches. She said overall the camp would be starting from next Monday here at the same venue Maazullah Khan Cricket Academy under Pakistan Cricket Board coaching penal in Khyber Pakhtunkhwa.
She said the trials were conducted accordingly wherein the performance of the players was monitored thoroughly with the aim to give ample opportunities to the female players of Khyber Pakhtunkhwa to be part of the next national teams in different age group categories.
She also appreciated Chairman Pakistan Cricket Board Rameez Raja for expressing his willingness to have Women PSL, which would certainly be a very key step in promoting women cricket in Pakistan besides providing an opportunity to the female cricketers of Pakistan to play side by side with international players on a regular basis.
According to details, in order to bring out talented women cricketers for the Under-19 Women’s World Cup and Women’s Pakistan Super League, trials were organized by the Pakistan Cricket Board for the players of Peshawar region including the southern and integrated districts of Khyber Pakhtunkhwa. Hajra Sarwar and Rehmat Gul said through such trials and talent hunt, it would give good opportunities to the upcoming young cricketers to the national level. Hajra Sarwar said that trials have been organized for the women players for the development and promotion of the U19 national cricket team. The main objective is to select the best team for the U19 Women’s World Cup in South Africa next year, she added.
Rehmat Gul said that the trials have been conducted in three different age categories including U19, Emerging and Senior categories. He said that trials have been successfully conducted in Mardan and Abbottabad before this. However, since our province is the winner of various competitions in Pakistan, we are trying to achieve a high position in women’s cricket at the national level. He said that competitions would be organized for them so that they would be given full opportunities to learn and move forward and at the same time new talents would emerge.