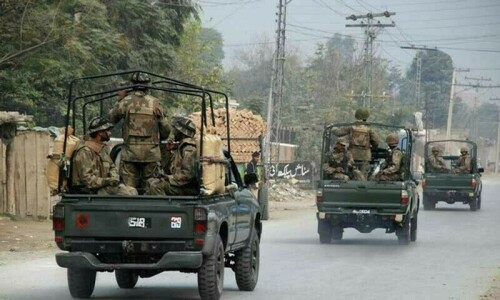 Two terrorists were killed by security forces during an intelligence-based operation (IBO) in the Mir Ali area of North Waziristan tribal district, the military’s media affairs wing said on Saturday.

According to the Inter-Services Public Relations (ISPR), during the IBO, an intense fire exchange took place between the army troops and terrorists.

The ISPR said that weapons and ammunition were also recovered from the site, elaborating that terrorists remained actively involved in terror activities against security forces, preparation of improvised explosive devices (IEDs) and killing of innocent citizens.

“Terrorist Commander Khabaib was also involved in a suicide attack on security forces convoy in Mir Ali in August 2022,” the statement added.

Separately, two army soldiers also lost their lives in Harnai, Balochistan the same day during a gun battle with terrorists.

The ISPR had said the terrorists’ fire raided a security forces post in Harnai’s Khost area on late Saturday night which was successfully repulsed by soldiers, and during the exchange of fire, two soldiers were martyred.