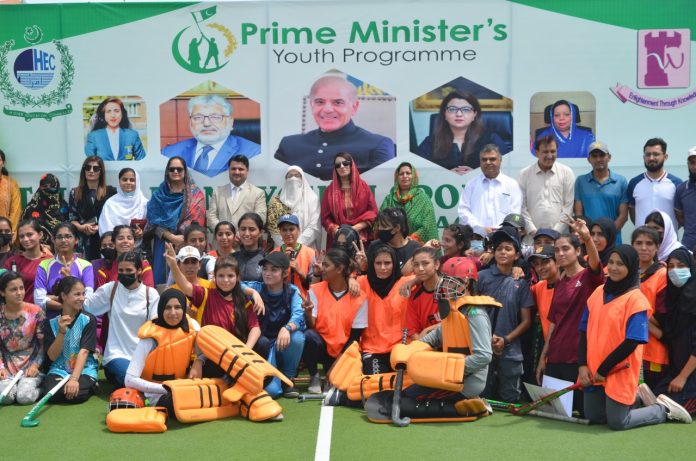 PESHAWAR
A total of 88 girls’ hockey players turned up for the trials in Mardan Region under Prime Minister Muhammad Shahbaz Sharif Youth Talent Hunt Program here at Gen Ehsan Sports Complex Mardan on Wednesday.
Advocate Saima Jaffari, Provincial Vice President Pakistan Muslim League (N) Women Wing, Coordinator of Prime Minister Youth Affairs for Khyber Pakhtunkhwa, Engineer Arif Rawan, Coordinator of Women’s Trials from Shaheed Benazir Bhutto University Deputy Director Sports, Mariyyah Sameen, selection committee international hockey player Iqra Javed of Pakistan WAPDA, international hockey player Sidra Pervez from Pakistan Army, RSO Nimatullah Marwat, Asif Islam Ziaur Rahman Banuri, Shiraz Ahmed of HEC, Administrator Mardan Sports Complex Saqib Khan and other personalities were present.
A total of 88 players participated in the trials matches held in four different sessions before short-listing 25 players, Mariyyah Samin told media men.
She said 25 players would be short-listed for the camp to be set up under qualified coaches in five different regions including Swat, Hazara, Mardan, Bannu and Peshawar. She said soon after completion the trials in all five Regions across Khyber Pakhtunkhwa camps would be organized in each of the Divisional Headquarters under qualified coaches, followed by Hockey League.
She also lauded Director General Higher Education Commission (HEC) for extending all out support to Directorate of Sports Shaheed Benazir Bhutto Women University holding the women trials across Khyber Pakhtunkhwa while the Men trials would be organized University of Peshawar.
She said that the trials will continue for two-day and after thoroughly witnessing the trials matches a total of 25 girls would be selected for Mardan. She said before Mardan, similarly, a trial was also organized in Peshawar.
Saima Jafri, Advocate, Deputy President of Pakistan Muslim League (N) Lawyers Forum, Khyber Pakhtunkhwa, was also introduced to the players participating in the trials. The talent hunt program has given opportunities to the players to come forward and it is hoped that they will take advantage of it to show their best skills and come forward.
The series will continue and there should be such talent hunt programs in all sports. Talent hunt programs are ongoing across the country under the supervision of Special Assistant of the Prime Minister Youth Talent Hunt Shaza Fatimah. After selecting the best players, matches will be made between them and then the final best provincial teams will be prepared and in the final stage.
Mariyyah Samin Jan said that due to flood situation, the trials have been rescheduled and now after trials in Mardan on September 21-22, 2022 at 9.00 a.m to 3.00 pm, similarly the trials in Hazara districts will be organized on September 29-30, 2022 from morning 9.00 a.m to 3.00 p.m at Abbottabad Police Hockey ground wherein players age between 15-year-old to 25-year-old from all districts of Hazara would participate.
After trials in Hazara, the same trials would organized at Makhan Bagh Hockey Stadium, Swat on October 4-5, 2022 from 9.00 am to 3.00 p.m and at the end of hockey trials it would be organized in Bannu on October 12-13, 2022 from 9.00 a.m to 3.00 p.m at Qazi Mohib Hockey Stadium.