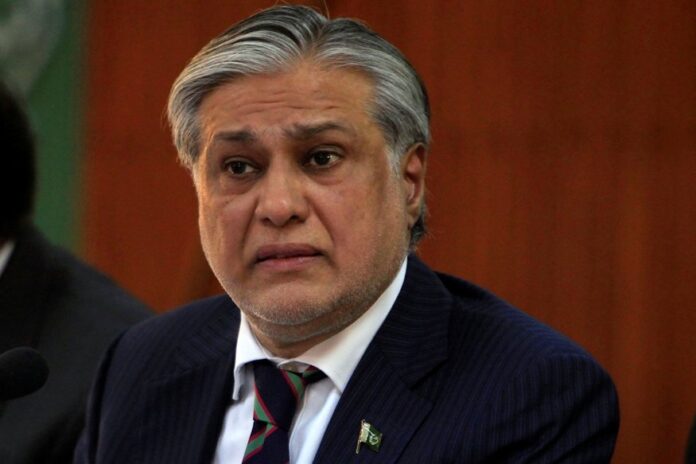 Maryam suggests Bani Gala should be raided to recover cypher
LAHORE
Finance Minister Ishaq Dar Saturday revealed that Principal Secretary Azam Khan has admitted that he gave the diplomatic cypher to PTI chief Imran Khan — which had been “stolen” from the records of the Prime Minister’s House.
Accusing the PTI for the missing cypher, Dar said: “The cypher is missing from the archives and the audio leaks have laid bare their plan.”
The finance minister was addressing a press conference flanked by the top brass of the PML-N, including Vice President Maryam Nawaz and Interior Minister Rana Sanaullah.
The finance minister blamed the previous PTI government for economically devastating the country, saying that the PTI have brought the economy where all the macroeconomic indicators are blinking red.
“Imran Khan pauperised the country and brought to the brink of default,” he said, claiming that his ultimate agenda was the “total annihilation” of the country.
The finance minister said that the Official Secret Act was violated.
“Khan is solely responsible for this whole travesty,” he maintained, adding that if we do not take action to bring this matter to its logical conclusion, then it would be another breach of the Constitution.
He further revealed that the cabinet has inspected all aspects in this regard in detail. “The minutes that were created regarding the diplomatic cypher are present; however, the original document is missing,” Dar added.
“This proves that conspiracy was not hatched by the incumbent coalition government instead the PTI was behind this,” he said, adding that a meeting of the National Security Committee has also been held in this regard.
Playing the purported audio leak of the former prime minister, Dar said: “We will betray our constitution if we do not take it to its logical end.
“The mess created in four years could not be cleaned in four-five months; however, our efforts will be to stop the destruction and Prime Minister Shehbaz Sharif’s team is working to provide relief to the masses.”
‘Mastermind of conspiracy against Pakistan’
Maryam, at the beginning of her address, expressed her happiness that people got a huge relief, alluding to the petrol price cut announced by Dar a day earlier.
“I do not want to say his [Imran Khan’s] name, but I am forced to, so that truth comes before the nation,” she said, calling him a “protagonist” as well as the “mastermind of this conspiracy against Pakistan”.
The PML-N vice president said that the more one listens to Khan’s leaked audio, the more they know what a “heinous game” the PTI chief played against Pakistan.
Regarding the previous audio leaks of the incumbent government, Maryam said that no matter how many audios of PML-N leaders are leaked none of the leaders will be heard speaking against the country.
“PML-N will never compromise on the security of Pakistan,” she asserted.
‘Biggest liar of century’
Recalling Khan’s ouster, Maryam said that when the PTI chief realised that his party members were turning against him and he was about to lose his power, Khan started spreading his “foreign conspiracy” narrative.
“Since day one I knew that he [Khan] was lying as he is the biggest liar of this century,” she said, adding that this wasn’t just conspiracy but this was also “tampering”.
Accusing the former prime minister of forging the sensitive documents of Pakistan, she said that Khan conspired against the foreign policy of Pakistan.
“PM Shehbaz told me that no country is ready to write a letter to Pakistan because of this fitna Khan [Imran Khan],” Maryam said, adding that other countries are afraid of communicating with Pakistan.
The PML-N vice president further added that the audio leaks are enough to indict Khan for his wrongdoings.
“You can look at the Supreme Court’s verdict, Khan even violated the order of the apex court while leaving his office,” she mentioned, adding that the highest court of the country has given its ruling against the former premier.

“The nation has been held hostage by this evil mind since last four years,” she asserted.

Maryam suggests Bani Gala should be raided to recover cypher
The PML-N vice president said that the PTI has hired a lobbying and PR firm for $25,000 per month to build its public and media relations in the United States.

Maryam said that Khan has been labelled as a traitor. “Even an animal is loyal to its owner but you [Khan] failed to stay faithful to your country,” she said.

The PML-N vice president said that Khan played with the country, and targeted the martyrs of the Pakistan Army under the guise of a cypher, which was not even real.

“You conspired against the martyrs, destroyed the country for your own interests and spoiled diplomatic relations,” she said while taking a jibe at the former prime minister.

She added that the PTI chief’s Bani Gala residence should be raided to recover the cypher.

“He will be somebody’s ladla, but he is not our [coalition government’s] ladla,” she said, accusing him of creating a rift in the important institution of Pakistan.

Maryam went on to say that she was surprised at herself and the system of this country, assuring the public that the coalition government will show his true face to the people.

Replying to a question, Sanaullah said that he hopes that the Parliament registers a case against him under Article 6.

Nawaz Sharif to return soon: Maryam
Shedding light on the audio leak regarding Maryam’s son-in-law planning to import machinery from India, the PML-N leader revealed that machinery was imported from the neighbouring country during PTI’s tenure and was procured according to the law.

“PM Shehbaz has himself announced that I didn’t ask him any favours for my son-in-law,” she reiterated.

Replying to a question, she said: “[PML-N supremo] Nawaz Sharif will soon return and take charge of the party.”