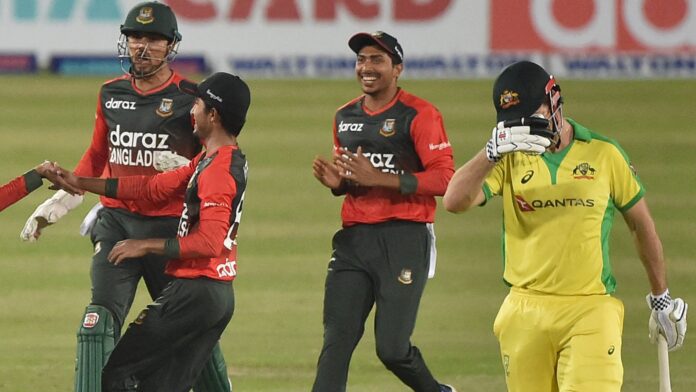 August 4 (Online): Bangladesh picked up their first ever Twenty20 win over Australia in the first game of their five-match series.
After being put into bat in Mirpur, Bangladesh made 131-7, with Shakib Al Hasan top scoring with 36 and Josh Hazlewood taking 3-24.
Alex Carey was bowled first ball of the chase, before Australia limped to 11-3.
They recovered to 71-4, leaving 61 to win from 42 balls, but lost regular wickets to be bowled out for 108, 23 runs adrift, from the final ball.
Left-arm spinner Nasum Ahmed recorded career-best figures of 4-19, with Mitchell Marsh top scoring with 45.
Eight Australia batters were out for single-figure scores, with three of those dismissed without scoring.
The series is the first bilateral T20 series between the two sides, with the previous four meetings in the format all coming in World Cups and ending in Australian victories.
Bangladesh have beaten Australia once in six Tests and have won one of their 20 completed one-day internationals.
The second game in the series takes place in Mirpur on Wednesday.