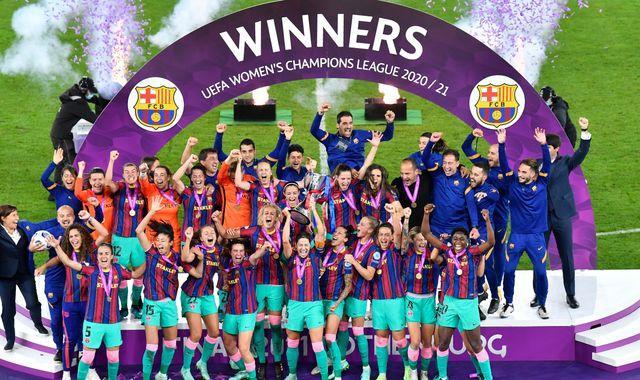 Gothenburg : Chelsea conceded four goals in the first 36 minutes as Barcelona blew them away to win their first Women’s Champions League.
Chelsea trailed 33 seconds in when an attempted clearance hit Melanie Leupolz and went in for an own goal, and Alexia Putellas’ penalty made it 2-0.
Aitana Bonmati finished an intricate move and Caroline Graham Hansen tapped in to put a rampant Barca out of sight.
Despite a spirited second-half display there was no way back for the Blues.
Barcelona become the first club to win both the men’s and women’s Champions League, and this was the biggest ever winning margin in a women’s final.
Emma Hayes’ Chelsea side had hoped to add a European crown to their Women’s Super League and League Cup triumphs this season, as they looked to become only the second English side in history, after Arsenal in 2007, to complete the quadruple.
It was a second Champions League final for Barcelona and the lessons learned from their previous experience proved invaluable this time round.
Against seven-time winners Lyon in 2019 they found themselves 3-0 down inside 20 minutes before going on to lose 4-1.
Two years later and it was they who were handing out that punishment, showing a ruthless edge that Chelsea do not yet have on the highest European stage.
Barca knocked out Chelsea’s biggest domestic rivals Manchester City in the quarter-finals and while the WSL now seems to be attracting the highest revenues and biggest names in Europe, this shows the level of its top clubs is still a bit below the leading one or two teams on the continent.
The Spanish side’s triumph brings an end to Lyon’s run of five Champions League titles in a row.