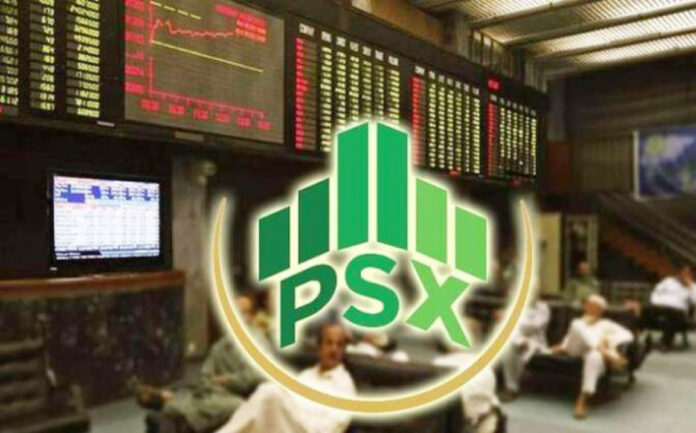 KSE-100 index closes at 40,965.58 points, Shares of 319 companies were traded during the session
KARACHI
The bears pulled the benchmark KSE-100 index below the 41,000-point mark as it extended losses for the sixth consecutive session.
A host of robust financial results failed to turn the direction of the market as investors remained cautious ahead of the Federal Reserve meeting tonight which can give a dollar a new direction.
Index-heavy exploration and production, cement, and technology were the major laggards where a modest sell-off was observed.
The session kicked off on a positive note, however, the market failed to sustain the gains due to a lack of investor interest and the index marched downwards. A few attempts made to reverse the direction of the market proved futile and the day ended on a negative note.
At close, the benchmark KSE-100 index closed at 40,965.58 points with a decrease of 255.33 points or 0.62%.
A report from Arif Habib Limited stated that another down-close session was observed today after a positive open.
“Continued pressure on the Pakistani rupee softened sentiment to take the KSE-100 below 41,000,” the brokerage house stated, adding that all eyes are on the Fed meeting tonight and the quantum of rate increase.
Sectors contributing to the performance included exploration and production (-91.9 points), cement (-39.3 points), technology (-26.9 points), banks (-24.3 points), and oil and gas marketing companies (-22.2 points).
Shares of 319 companies were traded during the session. At the close of trading, 100 scrips closed in the green, 195 in the red, and 24 remained unchanged.
Overall trading volumes rose to 170.41 million shares compared with Tuesday’s tally of 156.57 million. The value of shares traded during the day was Rs4.82 billion.
K-Electric was the volume leader with 40.31 million shares traded, losing Rs0.10 to close at Rs2.9. It was followed by TPL Properties with 11.92 million shares traded, losing Rs0.54 to close at Rs19.36 and TRG Pakistan with 114.07 million shares traded, losing Rs0.57 to close at Rs114.07.