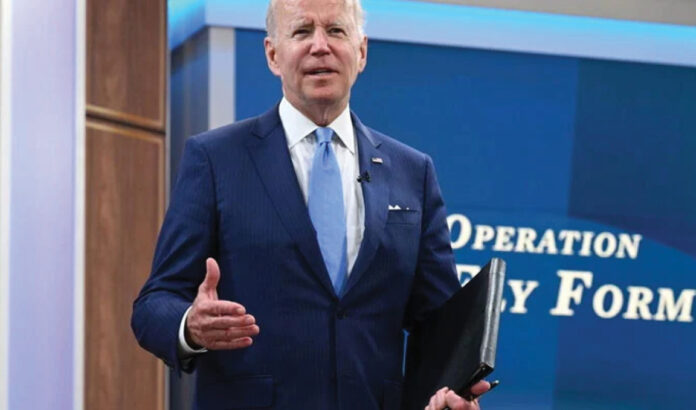 The US media said that Biden would go ahead with the long-rumored Saudi stop on an upcoming trip
WASHINGTON
US President Joe Biden will visit Saudi Arabia this month, reports said Thursday, a stark reversal for a leader who once called for the kingdom to be made a pariah.
The reported decision comes hours after Saudi Arabia addressed two of Biden´s priorities by agreeing to a production hike in oil and helping extend a truce in war-battered Yemen.
The New York Times, The Washington Post and CNN, quoting anonymous sources, said that Biden would go ahead with the long-rumored Saudi stop on an upcoming trip.
CNN said that Biden would meet Saudi Arabia´s de facto ruler, 36-year-old Crown Prince Mohammed bin Salman, who was accused by US intelligence of ordering the 2018 murder of dissident journalist Jamal Khashoggi.
White House Press Secretary Karine Jean-Pierre said she had no travel to announce, adding only: “The president will look for opportunities to engage with leaders from the Middle East region.”
However, a senior administration official told AFP that if Biden “determines that it´s in the interests of the United States to engage with a foreign leader and that such an engagement can deliver results, then he´ll do so.”
While not confirming the trip, the official, who spoke on condition of anonymity, said there was “no question that important interests are interwoven with Saudi Arabia.”
The trip would reportedly happen around the time Biden travels to a NATO summit in Spain and Group of Seven summit in Germany this month.
He is also widely expected to travel to Israel where, as in Saudi Arabia, he is sure to face pointed questions about slow-moving US diplomacy with the two countries´ rival, Iran.
While running for president, Biden called for Saudi leaders to be treated as “the pariah that they are” after the ultraconservative kingdom´s chummy relationship with his predecessor Donald Trump.
Trump had largely shielded Saudi Arabia from consequences after Khashoggi, a US resident who wrote critically about Crown Prince Mohammed in The Washington Post, was lured into the Saudi consulate in Istanbul where he was strangled and dismembered.
And Trump´s son-in-law and top aide, Jared Kushner, had developed a close bond with the prince known by his initials “MBS,” reportedly conversing with him over WhatsApp chats.
Shortly after taking office, Biden released the intelligence report that said MBS authorized Khashoggi´s killing and his administration imposed visa restrictions on dozens of Saudis accused of threatening dissidents.
Biden also scaled back support from a Saudi-led air campaign in Yemen amid revulsion over civilian casualties.
– MBS says doesn´t ´care´ –
A close partner of the United States since the World War II era, Saudi Arabia has repeatedly managed to woo administrations in Washington that initially sought a greater distance.
US officials were pleasantly surprised on Thursday as major oil producers led by Saudi Arabia grouped under OPEC+ agreed to a larger than expected hike in oil production.
A rise in supply could help bring down skyrocketing prices at the pump, seen as a major contributor to sagging poll numbers for Biden whose Democratic Party faces difficult congressional elections in November.
Officials in Washington said that Saudi Arabia was also supportive in diplomacy that led Thursday to the extension of a fragile two-month truce between Yemen´s Riyadh-backed government and Iranian-affiliated Huthi rebels.
“Saudi Arabia demonstrated courageous leadership by taking initiatives early on to endorse and implement terms of the UN-led truce,” Biden said in a statement.
Saudi Arabia has also addressed concerns of US officials who saw the kingdom as overbearing in troubled Lebanon.
Secretary of State Antony Blinken, presenting an annual report on religious freedom, praised “important recent moves” to increase interfaith dialogue even as he acknowledges that the kingdom still bans any public practice of religions other than Islam.
How to address human rights will likely be a complicated question for Biden, with MBS reportedly angered when US officials previously raised the killing of Khashoggi.
The senior US official downplayed the controversy, saying that there were concerns over human rights “as with many countries where we share interests.”
The official said that “much” of the concern over Saudi Arabia´s behavior “predated our administration” and said there “are also strategic priorities that are important to address, and our contacts and diplomacy have intensified recently.”
In a rare interview earlier this year with The Atlantic, MBS said of whether Biden understood him: “Simply, I do not care.”
“It´s up to him to think about the interests of America,” he said with a shrug.