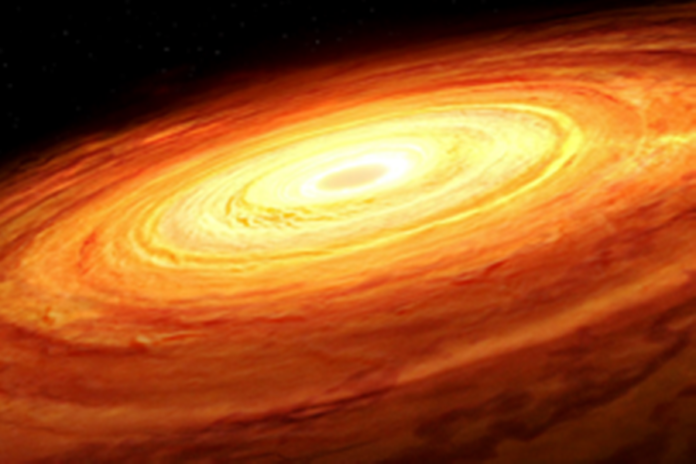 Astronomers think they have a new way to calculate the size of supermassive black holes: by studying the feeding patterns of these invisible giants.

Scientists have long noticed flickering patterns in the brightness of accretion disks, the fat ring of matter pulled in by a black hole’s gravity. But researchers weren’t sure what caused the flickering. Now, by studying dozens of known supermassive black holes, a team of astrophysicists has determined that the flickering of an accretion disk relates to the mass of the black hole swathed inside it — and the scientists believe that the same technique also applies to much, much smaller objects as well.

“These results suggest that the processes driving the flickering during accretion are universal, whether the central object is a supermassive black hole or a much more lightweight white dwarf,” Yue Shen, a co-lead author on the new research and an astronomer at the University of Illinois Urbana-Champaign, said in a statement.

To examine any connection between supermassive black hole size and the flickering light of the disk it feeds from, the scientists began by selecting 67 of these behemoths, each with a previously estimated mass of between 10,000 and 10 billion times that of our sun. (Supermassive black holes are much larger than stellar black holes, which form from a single star exploding and have masses of three to 10 times that of our sun.)

When that data seemed to show a correlation, the researchers decided to look at much smaller objects with accretion disks as well: white dwarfs, which are the much smaller dense remnants of stars like our sun that have exploded.

The scientists hope that the same relationship will hold for objects with masses between these two classes. A particularly intriguing variety would be an intermediate black hole, according to the researchers, since scientists have only identified one such object to date.

“Now that there is a correlation between the flickering pattern and the mass of the central accreting object, we can use it to predict what the flickering signal from an IMBH [intermediate black hole] might look like,” Colin Burke, the other co-lead author on the research and an astronomy graduate student at the University of Illinois Urbana-Champaign, said in the statement.

And scientists will soon have a new treasure trove of data that may hide the flickers of intermediate black holes when the Vera C. Rubin Observatory in Chile begins a decade-long survey in 2023.

The research is described in a paper published Aug. 12 in the journal Science.