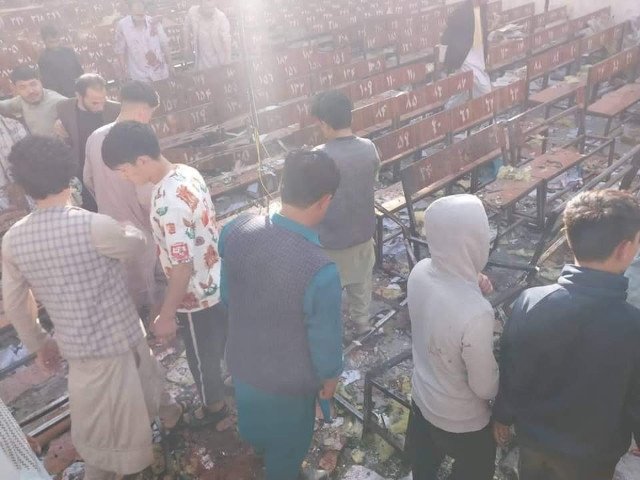 Attack took place at an education institute where an entrance exam was taking place
KABUL
At least 23 people were killed and dozens of others injured in a suicide attack at an education institute in the Afghanistan’s capital Kabul, police said Friday. According to reports, the explosion took place at the Kaaj education centre.
Students were taking a practice university entrance exam at 7:30 a.m., local time when the blast first took place, Kabul Police Spokesman Khalid Zadran said in a statement. Abdu Ghayas Momand, a doctor from Ali Jinah Hospital, where some of the victims have been taken, said 23 people had been killed and 36 more injured.
Taliban spokesman Zabiullah Mujahid condemned the attack in a tweet on Friday. “The Islamic Emirate of Afghanistan calls the attack on Kaj training centre in the 13th district of Kabul a big crime, strongly condemns it, and expresses the deepest sympathy to the families of the victims of this incident. Serious measures will be taken to find and punish the perpetrators,” he added.
The official death toll is likely to rise. There was no immediate claim of responsibility for the attack at the Kaaj Higher Educational Center in the west of the city. Many of those living in the area are Hazara, an ethnic military targeted in past attacks launched by the militant group Islamic State, the chief rival of the Taliban since their takeover of Afghanistan in August 2021, among others.
“This heinous act claimed the lives of dozens of adolescent girls and boys and severely injured many more,” UNICEF said in a tweet. “Violence in or around education establishments is never acceptable.
Such places must be havens of peace where children can learn, be with friends, and feel safe as they build skills for their futures,” the UNICEF remarked. The United States said it “strongly condemned the attack” in a statement on Twitter.
“Targeting a room full of students taking exams is shameful; all students should be able to pursue an education in peace and without fear,” the Chargé d’Affaires of the US Mission to Afghanistan wrote.
The UN special rapporteur for human rights in Afghanistan, Richard Bennett, also denounced the bombing. “I condemn today’s horrific attack on students at Kaaj Academy,” Bennett tweeted with the hashtag #studentsnotargets. “Onslaught on education for Hazaras & Shia must end. Stop attacks on Afghanistan’s future, stop int’l crimes.