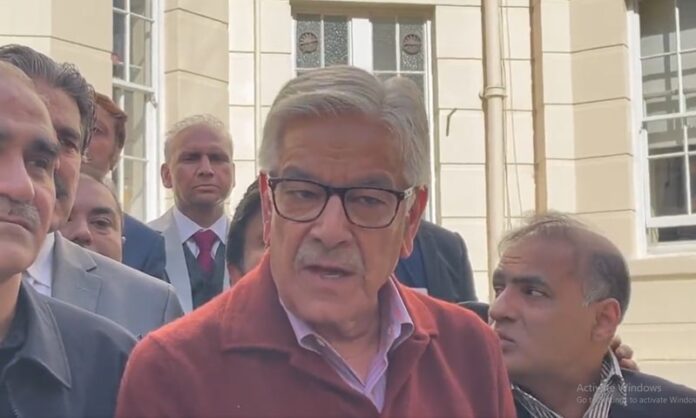 LONDON: Issues and solutions discussed during a high-level meeting between PML-N leaders, including the prime minister, and party supremo Nawaz Sharif in London over the last two days would be put before the government’s coalition partners before reaching a final decision, and the government would take the people of Pakistan into confidence over the next 48 hours, Defence Minister Khawaja Asif said on Friday.

“Until all of [our allies] are on board, we will not be able to reach a final decision,” Mr Asif said while talking to reporters in London along with Railways Minister Khawaja Saad Rafique.

PML-N leaders have remained tight-lipped about the major decisions taken at the meetings and have only talked to the media in vague terms.

However, a source present at the meeting told Dawn on Friday that the PML-N faced a tough choice: either increase fuel prices or pass the reins to an interim set-up. Though there are many in the party who agree that increasing fuel prices is the only way forward, the source said Nawaz Sharif was opposed to the idea. In this scenario, early elections were the only possibility, the source added.

Khawaja Asif insisted that whatever was discussed in London would be put before all the allies. “We are a coalition. We are not in a position to make decisions alone. Because the stakes belong not only to the PML-N, but also to the Peoples Party, JUI-F, BNP-Mengal, BAP, MQM and other parties,” he said, referring to major coalition parties that formed the government last month after former premier Imran Khan was ousted from office through a vote of no confidence.

He dismissed the impression that the government was under pressure. “If there is any pressure, it can be from the people of Pakistan. They have the right. They are the ultimate rulers according to the Constitution and law,” he said.

“We and our coalition partners will put our case before the people of Pakistan … [and take them] into confidence in the next 48 hours,” the defence minister said.

Speaking on the occasion, Railways Minister Saad Rafique rejected the notion the incumbent government was “cornered”, adding that “very soon you will see us playing in the forward position”.

He said Imran Khan and his supporters would not be allowed to spread unrest in Pakistan. “This is very clear, and how it’s done will be revealed in a few days.”

He said the PML-N leaders had lengthy sessions with Nawaz Sharif, including on the country’s economic situation, and discussed in detail the “wounds” and the “economic catastrophe” Imran Khan inflicted on Pakistanis, and also proposed the solutions.

“We have also talked about how the country and the nation are being divided,” he said. Imran Khan “kept playing the religion card, then the corruption card and when both of them failed [to achieve the desired results], he started playing the traitor card. This is not right.”

Meanwhile, Prime Minister Shehbaz Sharif is expected to return to the country on Saturday (today).