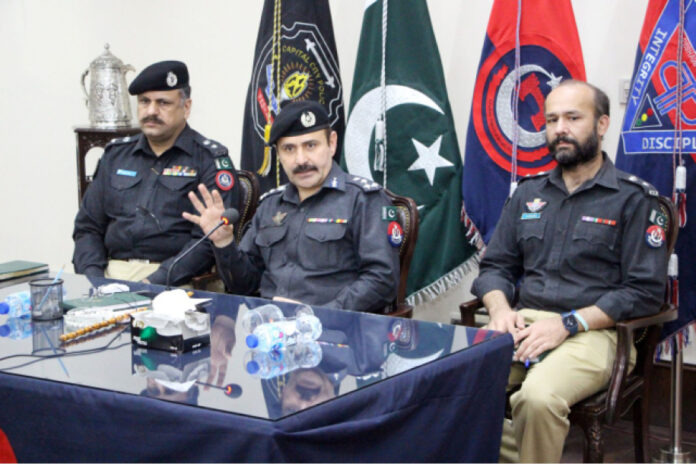 Haqnawaz Shinwari
Peshawar
The members of the ‘Muttahida Aman Committee’ met Capital City Police Officer (CCPO) Muhammad Ijaz Khan on Saturday.
CCPO appreciated the role of ‘Muttahida Aman Committee’ for supporting the measures of police in maintaining law and order situation in the provincial capital.
Muhammad Ijaz Khan on Saturday held a special meeting with a delegation of the committee and discussed in details the overall security situation of the provincial capital and lauded their role for peace.
The delegation led by Hussain Ahmed Madani Advocate included SSP Operation Haroon Rashid, SSP Investigation Shahzada Kokab Farooq, Divisional SPs and other officials of Muttahida Aman Committee were also present on the occasion.
CCPO Peshawar thanked Muttahida Aman Committee for its full cooperation with police and district administration on various religious occasions.
He clarified that the representatives of the committee have always played a positive role in promoting inter-faith harmony and maintaining law and order which is appreciated, adding that the recent tragic incident.
Security of all religious places of worship and educational institutions in the city has been improved, he shared.
Muttahida Aman Committee Chairman Maulana Hussain Ahmad Madani Advocate expressed satisfaction over the steps taken by the police to maintain law and order in the city and pledged full cooperation with the police and other government agencies.
Later on the participants of the meeting offered a special prayer for the security of the country and the nation in the meeting.