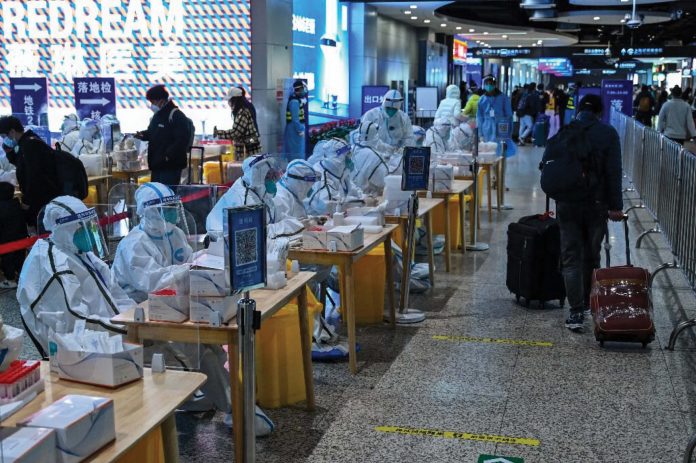 BEIJING
China announced on Wednesday a nationwide loosening of Covid-19 restrictions following protest against the hardline strategy that grew into calls for greater political freedoms.
Under the new guidelines, some asymptomatic and mild cases of Covid-19 can now quarantine at home, ending a requirement that all positive cases be isolated in centralised government facilities.
Under the new guidelines announced by the National Health Commission, the frequency and scope of PCR testing (long a tedious mainstay of life in zero-Covid China) will be reduced.
Lockdowns will also be scaled down and people with non-severe Covid cases can isolate at home instead of centralised government facilities.
And people will no longer be required to show a green health code on their phone to enter public buildings and spaces, except for “nursing homes, medical institutions, kindergartens, middle and high schools”.
The new rules scrap the forced quarantines for people with no symptoms or with mild cases.
“Asymptomatic infected persons and mild cases who are eligible for home isolation are generally isolated at home, or they can voluntarily choose centralised isolation for treatment,” the new rules read.
“Mass PCR testing only carried out in schools, hospitals, nursing homes and high-risk work units; scope and frequency of PCR testing to be further reduced,” they added.
“People travelling across provinces do not need to provide a 48-hour test result and do not need to test upon arrival.”
China will also accelerate the vaccination of the elderly, the NHC said, long seen as a major obstacle to the relaxation of Beijing’s no-tolerance approach to Covid.
Rare demonstrations against the ruling Communist Party’s zero-Covid strategy broke out across China late last month.
They expanded into calls for more political freedoms, with some even calling for President Xi Jinping to resign.
Authorities cracked down on subsequent efforts to protest while easing a number of restrictions, with some Chinese cities tentatively rolling back mass testing and curbs on movement.
The capital Beijing, where many businesses have fully reopened, said this week that commuters were no longer required to show a negative virus test taken within 48 hours to use public transport.
Financial hub Shanghai (which underwent a brutal two-month lockdown this year) announced the same rules, with residents able to enter outdoor venues such as parks and tourist attractions without a recent test.
And once dominated by doom and gloom coverage of the dangers of the virus and scenes of pandemic chaos abroad, China’s tightly controlled media dramatically shifted tone to support a tentative moving away from zero-Covid.
The prevalent Omicron strain is “not at all like last year’s Delta variant”, Guangzhou-based medicine professor Chong Yutian said in an article published by the Communist Party-run China Youth Daily.
“After infection with the Omicron variant, the vast majority will have no or light symptoms, and very few will go on to have severe symptoms, this is already widely known,” he assured readers.
But analysts at Japanese firm Nomura on Monday calculated that 53 cities (home to nearly a third of China’s population) still had some restrictions in place.
Wednesday’s announcement came hours after the government released further data showing the crippling economic impacts of zero-Covid.
Imports and exports plunged in November to levels not seen since early 2020.
Imports in November fell 10.6 per cent year-on-year, the biggest drop since May 2020, according to the General Administration of Customs. Exports fell 8.7pc over the same period.