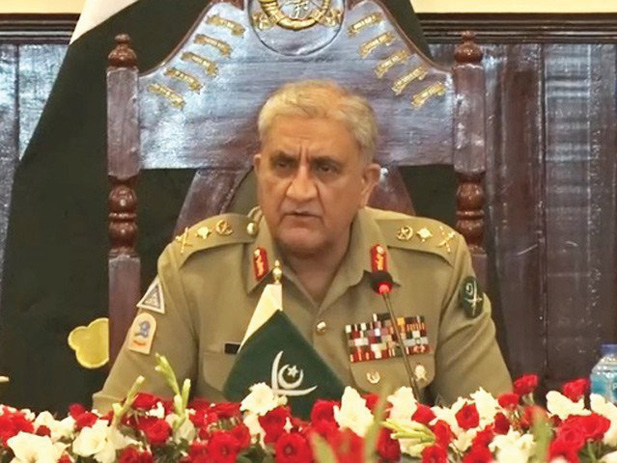 Gen Bajwa presides over 252nd Corps Commanders Conference; commends military’s efforts for flood relief
RAWALPINDI
Chief of the Army Staff General Qamar Javed Bajwa has ordered all-out efforts to crush terrorists as resurgence of the menace will not be tolerated.
The Army Chief made the remarks while chairing the 251st Corps Commanders’ Conference which was held at General Headquarters (GHQ), said a statement issued by the ISPR on Wednesday.
The Forum was briefed in detail on external and internal security situation with particular focus on flood situation and ongoing relief efforts being undertaken by the Army Formations across the country.
The Forum expressed solidarity with flood victims who are braving great difficulties and resolved to extend maximum assistance for their relief and rehabilitation.
The COAS commended Formations for reaching out to people in distress and helping them to mitigate their sufferings.
The COAS praised Army doctors/paramedics for provision of emergency medical care to flood affectees particularly children and women including measures to check spread of diseases in flood-hit areas.
The COAS also appreciated Army engineers/FWO for restoring accessibility of critical routes and communication infrastructure on emergency basis.
The COAS directed Formations to focus on relief, rehabilitation, reconstruction and help restore routine life in flood-affected areas.
The Forum undertook a comprehensive review of security environment with special focus on situation along the borders, internal security and other professional matters of the Army.
The Forum resolved that resurgence of terrorism will not be tolerated.
The Army Chief said that the Formations must leave no stone unturned in taking action against terrorists in coordination with all law-enforcement agencies (LEAs).
Expressing satisfaction over operational preparedness of Formations, the COAS directed all the Formations to maintain strict vigil to guard against any threat.