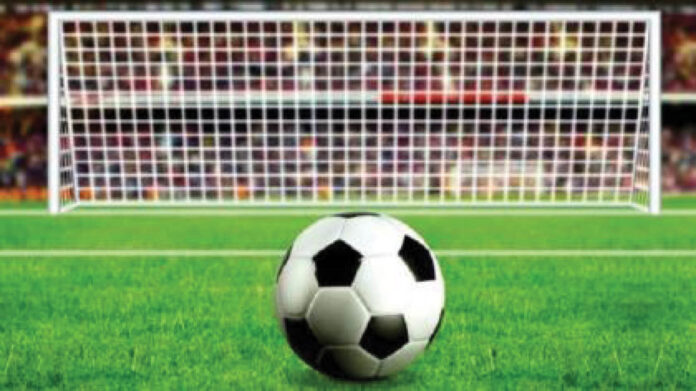 PESHAWAR
Commissioner Peshawar Riaz Khan Mehsud Wednesday unveiled the crown trophy and shirts of the forthcoming Peshawar Football League Season-5 to be starting from October 1, 2022 here at Tehmas Khan Football Stadium in which teams from all over the province will participate.
Commissioner Peshawar Riaz Khan Mehsud initiated the League when he was Deputy Commissioner in way back 2014 with the slogans “Bring Back Sports to Khyber Pakhtunkhwa and Say No to Drug” in a time when there were a serial of bombing that severally dejected the overall moral of Peshawarites in particular and the people of the rest of the country in general.
Briefing the media men, Commissioner Peshawar Riaz Khan Mehsud said that they have launched the sporting activities soon after the tragic incident of Army Public School (APS) occurred on December 16, 2014.
“I was the Deputy Commissioner and due to the Army Public School tragic and shocking incident, it largely demoralized, shocked and badly affected the youth of KP in particular and the youth of other provinces in general,” he informed.
“We have got the services of more than 3000 youth and through this way launched various sports, culture and social activities with the aim to bring our youth back to life again due to that trauma,” he added.
“I am very thankful to the Chairman Youth Glam Welfare Organization Gul Haider and other philanthropists who stood by the government and had the due role in bringing back the youth to live again and motivate them to come and participate in sports, social and cultural activities,” he said.
Riaz Khan Mehsud said the entire Pakistani nation was shocked, so various sports activities were launched to motivate the youth, in which Peshawar Football League Season-01 was the number one activity.
He said that the success of any nation depends on healthy activities and unless the youth of a nation is healthy, we cannot think of establishing a good society.
Therefore attention was paid to it and he accepted the challenge to attract youth towards healthy activities, he said. He said that youth is our future and expressed the hope that 365 players part of the 16 participating teams including Shinwari Stoori, Dara Nangiyali, Shaheen XI, Abbottabad Eagle, Hazara Tiger, DG Sports Warriors, DC Sarkar Peshawar, Akakhel Strikers, Chitral Darwish, Chitral Markhor, Tank Tooryalai and Afghan Pakhtun would help establishing a softer image of KP and Pakistan because the League would be shown in more than 200 counties of the world on TV channels, social media and certainly would publish the print media.
Along with the competitions, the message will be spread in the society for the prevention of drugs and the efforts of the government, especially the Peshawar division administration and the commissioner, will be fully supported to eradicate drugs and save the young generation.
He said the League is being organized for the 5th time in a row, in which opportunities are being provided to the youth to express their talents.
DC Sarkar team won the first edition, followed by Shinwari Stoori winning the 2nd and 3rd and the Season-4 title bagged by Directorate General Sports.
The League will continue for 16 days, in which each team will play three matches, after which the quarter-finals, semi-finals and final will be played at historical Tahamas Khan Football Stadium, which has beautifully been decorated and some of the matches will also be played under floodlight facilities at the Stadium.
Former international footballer Basit Kamal and former Pakistan Football Team skipper Gohar Zaman, District Sports Officer Miss Gul Rukh, Chief Organizer and Chairman Youth Glam Welfare Organization Gul Haider, Haji Noor Kamal, international footballer Alamgir Khan, KP Football Coach Jamshed Khan, and other important personalities were present.