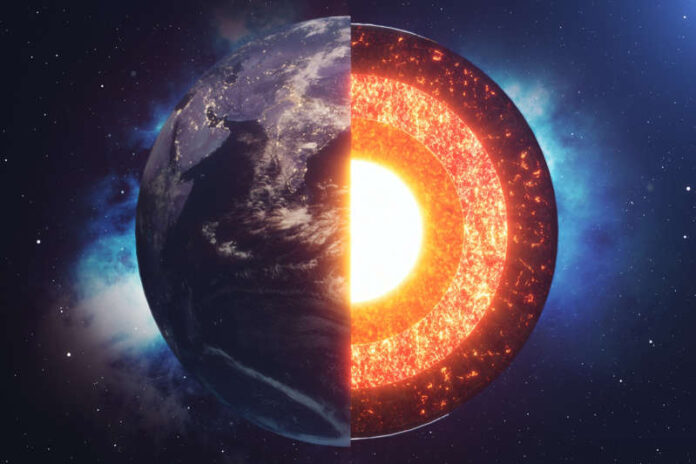 The core of the Earth may not be as solid as scientists had previously thought, according to new research that suggests some of it may actually be a white-hot mush.

The center of the Earth may lie deep below our feet, but the intensely hot metal core of our planet is actually crucial for our survival; its movement produces the magnetic field that protects us from the sun’s harmful radiation.

Scientists know that the core of the Earth is made of two parts—a solid inner core of iron and a liquid metal outer core.

But they’ve never actually been, and for good reason. At Earth’s core, the pressure is 3.5 million times higher than at the surface.

Put another way, the typical pressure of air inside a car tire is somewhere around 35 psi. At a depth of just 50 kilometers underground, the pressure is around 200,000 psi, according to the NASA-supported Classroom of the Future. The inner core of the Earth lies at around 5,100 kilometers deep.

Any person or machine we could send there would be instantly and inconveniently destroyed.

To get around this, scientists can infer what the Earth’s core is made of by studying earthquakes. As seismic waves pass through and around the center of our planet, their speed and direction is changed based on the different minerals, temperatures, and densities of the materials they encounter.

They found that large portions of the uppermost part of the inner core they observed appeared to be “mush,” down to a region of around 100 kilometers past the traditional boundary of the inner core.

“Since the early 1970s, Earth’s inner core has been modeled only as a soft iron alloy,” Butler told Newsweek. “We find evidence for both hard and soft iron alloys as well as melt below the traditional inner core boundary.

“The inner core is not uniform; rather the variability of the structures observed within the inner core are much greater than previously considered.

“Depending upon the path [of seismic waves observed], the inner core exhibits a broad range of properties from liquid to mush and soft to hard iron alloys.”

There are still gaps to be filled. The researchers don’t know, for example, the extent to which this mush is moving. There are also discrepancies in the data; some seismic paths between Chile and China, for instance, do not show this same mushy effect.

But if it is there, Butler suggested these mushy regions, estimated to be around 10,000 degrees Fahrenheit, could have implications for Earth’s magnetic field.

“It will be interesting to compare the location of these seismic structures in the context of Earth’s geomagnetic field,” he told Newsweek. “We patiently await new earthquake seismic data meeting the exacting path requirements for illuminating the inner core.”

The study has been accepted for publication in the journal Physics of the Earth and Planetary Interiors and is due to be published in December. It was made available online on September 20.

Facebook is planning to rebrand the company with a new name