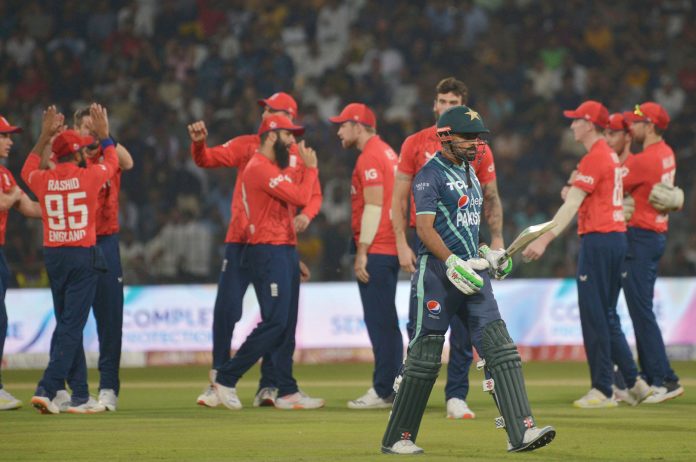 Pak vs Eng
Visitors beat Pakistan by 67 runs in seventh T20I to take series by 4-3
LAHORE
England beat Pakistan by 67 runs in the seventh and final Twenty20 international in Lahore on Sunday, taking the series by 4-3.
In the first innings, Dawid Malan scored a brilliant half century to take England to 209-3 in the series-deciding seventh and final Twenty20 international against a sloppy Pakistan in Lahore on Sunday.
The left-hander hit a 47-ball 78 not out and was ably supported by Harry Brook (46 not out) and Ben Duckett (30) after England were sent in to bat by Pakistan at Gaddafi Stadium.
Dropped twice by Pakistan skipper Babar Azam on 29 and Mohammad Wasim on 62, Malan struck eight boundaries and three sixes in the 13th half-century of his T20I career.
Brook, dropped on 24 by Azam off Haris Rauf, struck four sixes and a boundary in his 29-ball innings and added 108 for the fourth wicket with Malan in 10.1 overs.
For Pakistan, fast bowler Mohammad Hasnain took 1-32 while fellow paceman Mohammad Wasim went for 61 runs in four wicket-less overs.
The series — England’s first tour of Pakistan for 17 years — is tied at 3-3 with the visitors winning the first, third and sixth games.
Pakistan brought back Mohammad Rizwan, Rauf, Hasnain and Khushdil Shah in four changes while England recalled pacer Chris Woakes for Richard Gleeson.
Pakistan team to leave for New Zealand tonight for tri-series
The Pakistan cricket team is all set to leave for New Zealand for the tri-nation series after the last match against England of the seven-match series on October 2 (Sunday).
The team will fly right after the final clash tonight. The squad will leave for Australia’s Sydney via Dubai, United Arab Emirates. The Men in Green will then be flown to Auckland in New Zealand and then to Christchurch where they will be facing Bangladesh and the Kiwis in a tri-series, which will begin on October 7.
Pakistan’s first match in the series is against Bangladesh, while the final is scheduled to be played on October 14.
Players of the English squad will travel from Pakistan in groups. Those slated to play the ICC T20 World Cup will fly to Australia directly from Pakistan. Following the tri-series, Pakistan’s squad will participate in the highly-anticipated mega T20 event and will travel back to Australia on October 15 for an action-packed World Cup 2022.
The team will partake in a practice session on October 17 and 19, ahead of its games in the World Cup.
The T20 World Cup begins on October 16 with the inaugural matches of the qualifiers to be played between Group A teams Sri Lanka and Namibia, as well as UAE and Netherlands.