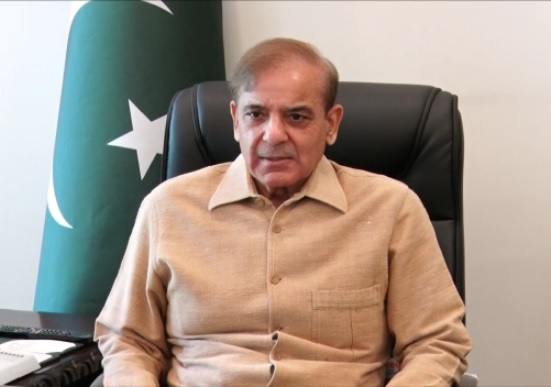 Prime Minister Shehbaz Sharif has said the federal and provincial governments will undertake joint efforts for the relief and rehabilitation of flood affected people.
He was talking to the media persons during his visit to a tent village in Khusnoob area of Qilla Saifullah on Monday.
Shehbaz Sharif said payment of compensation has immediately been started to the flood affected people.
He said the federal government is disbursing one million rupees to the heirs of those who lost their loved ones in the calamity. Balochistan government will also extend the same compensation to the bereaved families. He said financial assistance will also be provided to the injured.
Shehbaz Sharif said a joint survey will also be conducted to assess the damages caused by the floods to crops, livestock and the infrastructure. He assured that compensation will also be given to the people who lost their crops and livestock whilst infrastructure damaged by the floods will also be repaired.
The Prime Minister took serious notice of non-provision of ration in the tent village. He directed the authorities concerned to ensure provision of ration and water to the flood affected people.
Chief Minister Balochistan Abdul Quddus Bizenjo said directions had been issued to the authorities for provision of ration and water to the people in tent village. Suspending the Deputy Commissioner, Tehsildar and the concerned officials of PDMA over their negligence, he said an inquiry will also be conducted into the matter. He assured that the ration will be provided to the affected people on daily basis.
Earlier, the Prime Minister was given a detailed briefing on the rescue and relief efforts in the flood affected areas.
On arrival in Quetta, Chief Secretary Balochistan Abdul Aziz Uqaili and Chairman NDMA Lieutenant General Akhtar Nawaz gave a detailed briefing to Prime Minister Shehbaz Sharif on the damages caused by floods in Balochistan and the rescue and relief efforts.
Speaking on the occasion, the Prime Minister said it is our national tragedy that no attention was paid in the past for the construction of dams. He said we will not rest in peace until the complete rehabilitation of the flood affected people.
Commending the efforts of PDMA, NDMA, provincial administration and the NHA, he directed to spread the network of medical camps in the flood ravaged areas.
The Prime Minister also appealed the local and international organizations to assist the government in providing relief to the affected population.
During the briefing, it was informed that the floods have so far claimed lives of 136 people and injured seventy others in Balochistan province. It was informed that twenty thousand and five hundred people have been shifted to safer places. Motorway M-8 and Quetta-Karachi highway have been restored to a great extent.