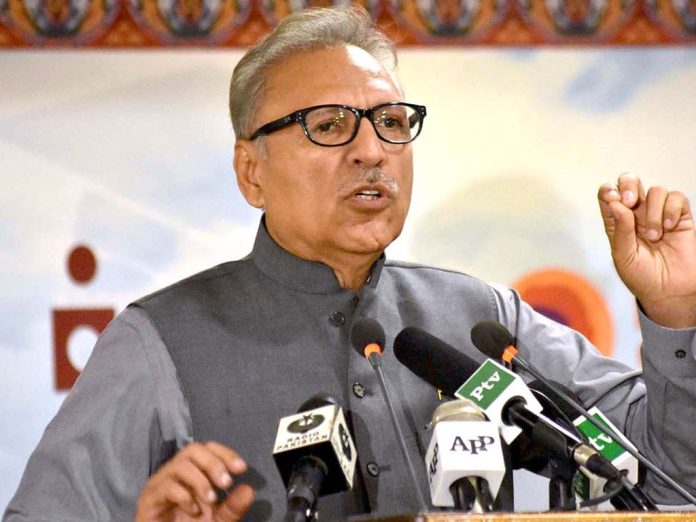 In his message on International Anti-Corruption Day, he said corruption contributes to instability and poverty and is a dominant factor driving fragile countries towards state failure.

President Alvi said Pakistan reaffirms its commitment to eliminate corruption in all its forms and manifestations and promote transparency and accountability in our governance system.

“Corruption is a serious challenge faced by both developing and developed countries and requires consistent efforts, effective monitoring and controls, committed leadership, and an active civil society to curb this menace from society,” he said.

He said the scourge of corruption and its various manifestations, moral or financial, are responsible for some of the gravest threats facing the nation.

He said the International Anti-Corruption Day provides everyone with an opportunity to reflect on the progress we have made over the past years in the fight against corruption, but also to think about the work that remains to be done in the years ahead.

“Elimination of corruption is a mission but we will not succeed in this fight unless we are fully committed to its elimination, and are guided by the ingenuity, expertise and energy of those who are on the frontlines of this fight,” he stressed.

Thr president said although Pakistan has taken a number of actions to eliminate corruption and ensure accountability, however, much needs to be done in this regard.

“The fight against corruption cannot be won unless all segments of society join their hands in the efforts to uproot corruption,” he said.

The president said the role of civil society was also very critical in detecting the root causes of corruption, exposing corrupt acts, shifting social norms, and mobilizing support for ambitious reforms based on moral values, justice, fairness and equal opportunity for all.

“When anti-corruption efforts are well-rooted, they are more likely to be effective and sustained. It is, therefore, vital that we come together with a collective response to eradicate corruption,” he added.

“Enhancing the capabilities of criminal justice institutions to investigate and prosecute corruption is also crucial to exposing malign influence,” he said.

In addition, he said, procurement processes that comply with international anti-corruption standards will ensure a level playing field for investors.

He said most importantly, a robust civil society and free press are critical to hold public officeholders responsible for their actions.

“It is high time to unite the role of key stakeholders and individuals in the elimination of corruption by sharing best practices and examples of preventing and countering corruption worldwide,” he said.

The president said this could be achieved by strengthening international cooperation against corruption, tackling linkages with other forms of crimea and enabling the recovery and return of stolen assets.

Also, developing innovative solutions, advancing prevention through education, leveraging youth engagement and mobilizing allies in civil society, academia and the private sector in line with the dictates of United Nations Convention Against Corruption could be the solution.

He reaffirm the commitment to eliminate corruption, promote transparency and accountability, and purge this evil from society.

“I am hopeful that Pakistan can emerge as a strong and prosperous nation if we make committed, concerted and sincere efforts to root out this menace from our society,” he said.