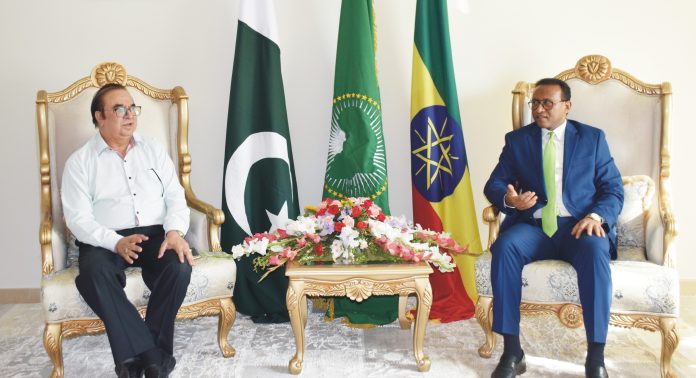 Islamabad : Mirza Abdul Rehman, Chairman Coordination Federation of Pakistan Chamber of Commerce & Industry, visited the Embassy of of Federal Democratic Republic of Ethiopia in Islamabad and met H.E Jemal Beker Abdula, Ethiopian Ambassador to Pakistan. Both discussed the matters of mutual interest and talk over regarding wide-ranging trade, industry and commercial avenues of cooperation, investments and joint ventures, On behalf of business and trading community.

Jemal Beker Abdula, Ambassador of Federal Democratic Republic of Ethiopia said that Ethiopia has vast and fast-growing market in African region, and it sees Pakistan as a preferred partner and is keen to expand trade, business, investment, and tourism relations. Our business and economic ties have not been adequately developed. Pakistan have vast opportunities to export its products to Ethiopia, which they have already been importing various goods, including textiles from Russia, India, and China. Ambassador has said Ethiopia Airlines would fly to the sky of Pakistan soon. Indeed, the commencement of Ethiopia’s Airline will boost the trade, investment, and tourism between Ethiopia and Pakistan, the rest of Africa, and the globe.

Ambassador further Said that In terms of their geostrategic location, Pakistan and Ethiopia are located at a very important geographical location, which has a very important place in terms of trade and economy. Bilateral connections in the business community are very important for the promotion of trade and economic relations in both countries, for which his embassy will fully collaborate with the FPCCI. there are vast opportunities for economic and trade relations between Pakistan and Ethiopia from which both countries can reap benefits.

During the discussion on this occasion, Mirza Abdul Rehman Chairman Coordination FPCCI said that the true potential for bilateral trade is much higher in Pakistan & Ethiopia. He suggested preferential or free trade agreement to promote trade relations up to their actual potential. Many Pakistani products including marble & granite, pharmaceuticals, cement, leather, rice, and sports goods can find a good market in Ethiopia and urged Ethiopia to focus on Pakistan for imports. He said that investment cooperation is other area in which both countries could collaborate for mutual benefits. Bilateral trade between the two brotherly countries can be increased multifold. Pakistan is a big potential market and economic and trade relations are in the interest of both countries. He said that frequent exchange of business delegations are the options that can bring people of both the countries closer to each other that would eventually enhance the mutual cooperation between Pakistan and Ethiopia.

Mirza Abdul Rehman further said that direct air links between major cities of Pakistan and Ethiopia will boost trade relations and tourism between the two countries and direct air flight is vital for both emerging economies. This is a very important step for both countries, which will not only promote the relations between Pakistan and Ethiopia but also the economic and trade integration of the African region with Pakistan.

Deadlock persists as talks between govt, farmers yield no result