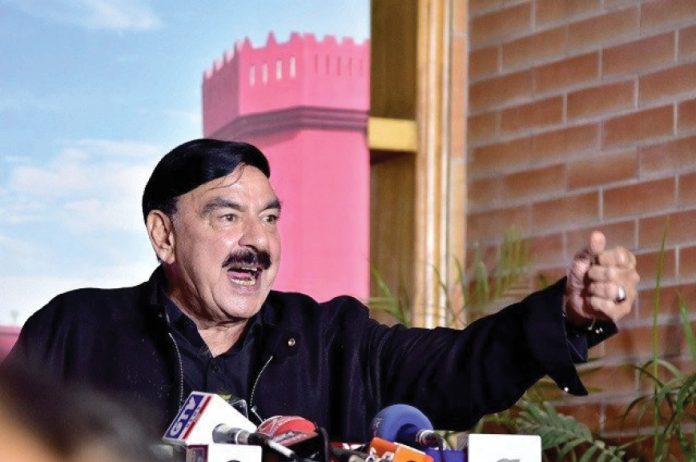 Ex-interior minister says a major crackdown will be launched on social media ahead of the ‘crucial decision’
Islamabad
Awami Muslim League (AML) chief and former interior minister cAhmed has said that the game of selecting and rejecting politicians will result in a major crisis “as people of the country are standing by PTI Chairman Imran Khan”.
He made these remarks on Sunday while addressing a PTI power show in Rawalpindi’s Liaquat Bagh ground.
Rashid was apparently referring to the PTI chief’s claims that the conspiracy was being hatched to disqualify him and in Toshakhana and prohibited funding cases to pave way for PML-N supremo Nawaz Sharif’s return from London.
Sniffing conspiracy behind the recent onslaught of legal actions against him, Imran had said the motive behind the attempts to disqualify him was to force him to strike a deal with the government to nullify Nawaz’s lifetime disqualification so that both can compete in the political arena.
Rashid while taking a jibe at the incumbent rulers said that “thieves and robbers” are busy closing down their corruption cases after coming to power.
He added that the national security institutions always stood by the nation while “the nation is with Imran Khan”. “The real prime minister of the country is Imran Khan, not these thieves,” the AML chief remarked.
Calling the former premier Nawaz “biggest thief” of the world, Rashid said the country’s economy witnessed 6 per cent GDP growth during the previous tenure of the Imran-led government.
“I am telling all institutions to stop if you can… see Imran Khan is coming.”
Earlier in a tweet from his official handle, Rashid while referring to the Pakistan Electronic Media Authority (Pemra) notice banning live broadcast of former PM Imran speeches warned of a crackdown on social media.
“Ahead of the crucial decision, the authority will be formed against social media. YouTubers are also going to be surrounded,” he added.
The former interior minister said the ruling party’s two factions PML-N and PML-S will come face to face.
“[Former finance minister Ishaq Dar was stopped by S group,” he said while referring to the possible return of the PML-N leader to Pakistan from London.