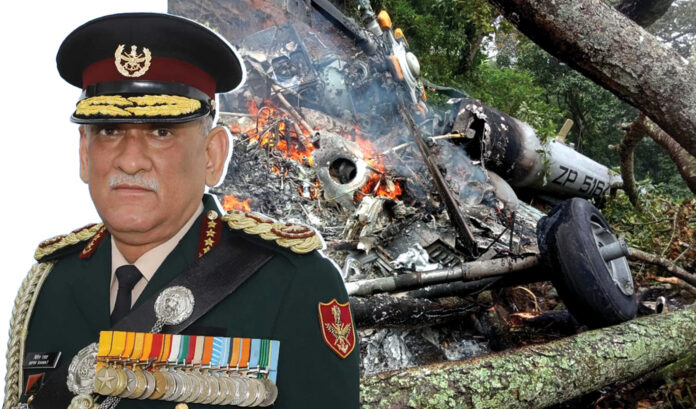 It has now been ascertained Gen Bipin Rawat, Madhulika Rawat and 11 other persons on board have died, confirms IAF
New Delhi
India’s Defence Chief Bipin Rawat, his wife and 11 other people were killed after a military helicopter they were travelling in crashed in southern India on Wednesday, the Indian Air Force said.
“With deep regret, it has now been ascertained that Gen Bipin Rawat, Mrs Madhulika Rawat and 11 other persons on board have died in the unfortunate accident,” IAF said on its official Twitter handle.
Rawat was travelling from an Indian Air Force base in Sulur to the Defence Services Staff College in Wellington in the Indian state of Tamil Nadu to deliver a lecture. Hill station Coonoor is along the flight path.
“Around noon today, an IAF Mi 17 V5 helicopter with a crew of 4 members carrying the CDS and 9 other passengers met with a tragic accident near Coonoor, TN.,” IAF said. Video footage showed rescue workers dousing steaming wreckage in a wooded area.
Rawat was on his way to Wellington in Coonoor from an IAF airbase in Sulur near Coimbatore, sources told Indian media and had left Delhi earlier today.
Tamil Nadu chief minister, MK Stalin, instructed the local administration to provide the best possible medical care to the injured. Indian Prime Minister Narendra Modi and Defence Minister Rajnath Singh have also been briefed over the incident.
Rawat was appointed as India’s first Chief of Defence Staff (CDS) by Prime Minister Narendra Modi’s government in late 2019. The position was set up with the aim of integrating India’s three services — the Army, the Navy and the Air Force.
Lauding his services for the country, Indian Prime Minister Narendra Modi said that Gen Rawat worked on diverse aspects relating to the Indian armed forces including defence reforms as the country’s first CDS.
“He brought with him a rich experience of serving in the army. India will never forget his exceptional service,” he wrote on his official Twitter handle.