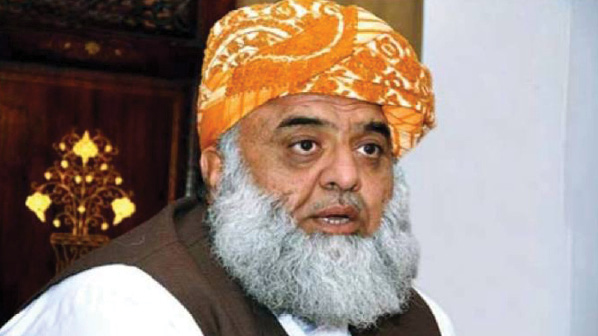 JUI-F chief Fazlur Rehman says coalition government does not accept “soft or hard interference”
Islamabad
PDM chief Maulana Fazlur Rehman Saturday revealed that the coalition government has been told to follow instructions otherwise a crisis would be created for them.
Speaking with Geo News, the PDM chief said that if institutions are quiet then there would be no crisis.
“Imran Khan is nothing in front of us and should not be presented as a threat,” said Fazl adding that they know the worth of the PTI chief and he knows theirs.
The JUI-F chief said that Prime Minister Shehbaz Sharif has the status of unity of command, however, the government is told to follow directions.
He went on to say that he has complained to the coalition government over its silence on Imran Khan’s scams during his tenure.
Talking about the establishment’s “soft intervention” under which it may mediate between PTI Chairman Imran Khan and the coalition parties, Fazl said that the coalition government does not accept “soft or hard interference”.
“I want to see the army, generals and the judiciary neutral. The institutions should remain in their boundary,” said the PDM chief, adding that “Imran Khan had the support of the establishment and the judiciary, but both of them acted as neutrals as soon as the coalition government came into power”.
The JUI-F chief said that the idea of early elections is a result of “soft intervention”.
Fazl, speaking on the judiciary, said that the court should stick to its verdict given earlier, and the new developments shouldn’t take place on daily basis.
“If the court has made a mistake, then it should not hear that case again,” he added.
He further said that the institutions are trying to influence each other which is leading to the state’s destruction and the politicians and the government are always held responsible for it.