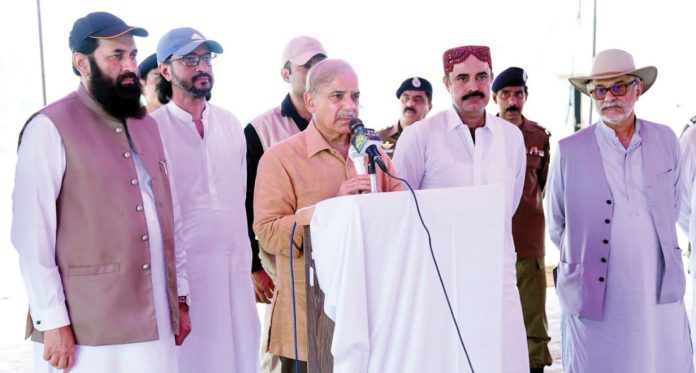 ROJHAN
Prime Minister Shehbaz Sharif on Friday said the government would actively carry out relief work in the flood-affected areas till the rehabilitation of all victims.
Addressing a public gathering in Rojhan, the prime minister said the federal government was committed to facilitate the flood-affected people in collaboration with the provincial government.
The prime minister said the government as its prime vision to serve the people would extend every possible assistance to the people who suffered losses in the wake of recent floods. He advised the departments concerned to be vigilant of the upcoming rain spells to avoid further damage to human lives, property and livestock.
He stressed the early disbursement of compensation money among the people affected by floods, adding that He said the federal government had increased the cash assistance for injured people from Rs25,000 to 250,000. He also announced a similar compensation of Rs0.5 million for both mud and concrete houses damaged completely and Rs 0.2 million for partially hit ones.
PM Sharif said, “The affected people are looking towards the government for mitigation of their sufferings and stress, any negligence in the supply of food, medicines, and accommodation would not be tolerated.”
He emphasized extending a uniform level of facilitation to flood victims across the country and ordered ensuring proper cleaning, sanitation, and fumigation in the flood-hit areas to avert the spread of diseases and the provision of clean drinking water to control gastric diseases.
He emphasized the need for a joint survey by federal and provincial governments to assess the damages in the wake of floods.
PM Sharif said the federal government was committed to providing relief to the people affected by floods and ensuring their early rehabilitation. He said that both the federal and provincial governments were working round the clock to provide relief to the affected population.
The prime minister earlier had an aerial view of the area to see the devastation caused by the heavy rains. He, on the occasion, was given a briefing by the authorities concerned regarding the ongoing relief and rehabilitation work in the area including the supply of food, drinking water and basic health facilities to the displaced people staying at temporary shelters.
The prime minister was informed about the provision of mobile hospitals and allied facilities to affected locals. Also, the initial survey has been submitted with Provincial Disaster Management Authority.
Federal Minister for Information Marriyum Aurangzeb, Special Adviser Ataullah Tarar, Member National Assembly Sardar Riaz Mehmood Khan Mazari, Aslam Bhootani and Chairman National Disaster Management Authority Lt Gen Akhtar Nawaz accompanied the prime minister.